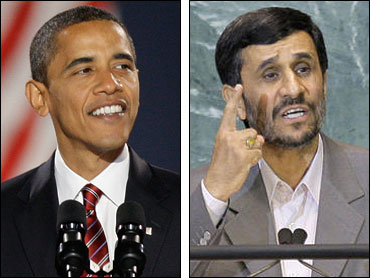 Iranian President Mahmoud Ahmadinejad on Thursday congratulated Barack Obama on his election win - the first time an Iranian leader has offered such wishes to a U.S. president-elect since the 1979 Islamic Revolution.

Ahmadinejad sent a message to Obama in which he congratulated the Democrat on "attracting the majority of voters in the election."

The text of the note was carried by the official IRNA news agency.

In the message, Ahmadinejad also said he hopes Obama will "use the opportunity to serve the (American) people and leave a good name for history" during his term in office.

Obama has said he is open to direct diplomacy with Iranian leaders as a way to break the impasse between the two countries or give the U.S. more credibility to press for tougher sanctions if talks on its nuclear program fail. His policy marks a departure from that of the Bush administration, which has refused to engage Iranian leaders.

Iran and U.S. have no formal diplomatic relations since 1979 and the hostage drama when militant Iranian students held 52 Americans captive 444 days.

In Jerusalem, Israeli Foreign Minister Tzipi Livni, a contender for prime minister in her country's elections, warned against any dialogue with Iran - a first sign of Israeli disagreement with the incoming U.S. administration.

"Dialogue at this time is liable to broadcast weakness," cautioned Livni, who is head of the governing Kadima Party. "I think early dialogue at a time when it appears to Iran that the world has given up on sanctions could be problematic."

Israeli officials describe Iran as the biggest threat to the Jewish state's existence, citing Ahmadinejad's frequent calls for Israel's destruction and its development of long-range missiles capable of striking the Jewish state.

Livni has repeatedly said she hopes international diplomacy prevails. But she doesn't rule out force if U.N. sanctions don't pressure Iran to scale back its nuclear aims. In June, she said Iran "needs to understand the military threat exists and is not being taken off the table."

Iran sees Obama's victory as a triumph over the unpopular policies of President Bush, who repeatedly clashed with Iranian leaders while in office over Iran's nuclear program and its opposition to the U.S.-led invasion and occupation of Afghanistan and Iraq.

In his message to Obama Thursday, Ahmadinejad went on to say that "nations of the world" expect changes from Obama - mostly that he will change current U.S. foreign policy.

That policy, the note claimed, was "based on warmongering, occupation, bullying, deception and humiliation, as well as discrimination and unfair relations" and has led to "hatred of all nations and majority of governments toward the U.S. leaders."

Ahmadinejad also said that Obama is expected to replace such a policy with "an approach based on justice and respect, as well as lack of intervention in the affairs of others."

Iran's government refused to publicly side with any of the U.S. candidates throughout the presidential race, although Parliament Speaker Ali Larijani said last month that Obama seemed "more rational" than John McCain.

The Bush administration moved Thursday to clamp down on Iran by barring financial institutions from routing certain money transfers through the United States on behalf of Iranian banks, Iran's government and others in the country.

Specifically, the Treasury Department announced that it is revoking Iran's so-called "U-turn" license that until now has allowed for such money transfers under certain conditions.

"This regulatory action will close the last general entry point for Iran to the U.S. financial system," the department said in a release.

"Given Iran's conduct, it is necessary to close even this indirect access," said Stuart Levey, the Treasury Department's undersecretary for terrorism and financial intelligence.

The action comes as the Bush administration has repeatedly warned U.S. banks that Iran is using an array of deceptive practices to hide its alleged involvement in nuclear proliferation and terrorist activities. The United States says Iran is resorting to such alleged practices to evade detection and skirt financial sanctions.

Levey said that at one point "U-turn" licenses were widely used to process trade transactions. However, over the last two years there have been fewer "U-turn" transactions reflecting less willingness on the part of U.S. banks to handle them given the United States' ongoing financial crackdown on Iran, Levey told reporters at a briefing on the matter.

Still, Iran has used the "U-turn" transactions "as a hook to solicit foreign banks to process transactions through the United States on its behalf, sometimes with requests to substitute another bank or code word for the Iranian institution," Levey said.

The action doesn't affect otherwise permissible payments such as for shipments of food and medicine, family remittances and the export of informational materials to Iran, Levey said.

Thursday's step marks the latest effort to tighten the financial noose on Iran, which the United States accuses of bankrolling terrorism and seeking a nuclear bomb. The United States has already imposed sanctions on several state-run Iranian banks and businesses along with elements of its defense ministry and Revolutionary Guard Corps.