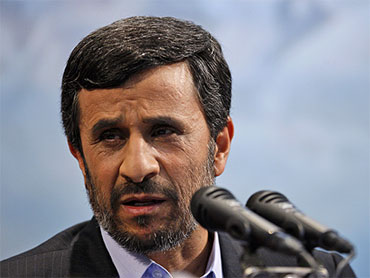 Russia, the U.S. and France have urged Iran to stop enriching uranium to higher levels and suggested the project reinforces suspicions that Tehran is seeking to make nuclear weapons. The joint statement, made public Tuesday, reflects unified Russian and Western opposition to Iran's increased enrichment.

Shrugging off international concerns, Iranian President Mahmoud Ahmadinejad announced the country was moving ahead to expand its enrichment capacities by installing more advanced machinery at its main enrichment facility.

Ahmadinejad told reporters in Tehran Tuesday the new centrifuges are not yet operational but are five times more efficient than the model now in use at its underground Natanz enrichment plant.

Officials at the Vienna-based International Atomic Energy Agency said they had no comment. The latest IAEA report on Iran in November said that as of early October no advanced centrifuges had been installed at the plant, although some were being tested in a separate area of the facility.

Because enrichment can produce both nuclear weapons as well as reactor fuel, Iran is under three sets of U.N. Security Council sanctions for refusing to stop its program. Its determination to expand such activities had been criticized worldwide even before an announcement earlier this month that Tehran would enrich to a higher level.

The confidential letter critical of the higher-enrichment plan was shared Tuesday with The Associated Press. Dated Feb. 12, it was addressed to IAEA chief Yukiya Amano and signed by senior U.S., Russian and French envoys.

Moscow in the past has often put the brakes on Western attempts to penalize Tehran for defying U.N. Security Council demands that it freeze its enrichment program, which can produce both nuclear fuel and the fissile core of warheads. But while Russia has recently signalled more support for new U.N. sanctions, China — a veto-wielding member of the U.N. Security Council that depends on Iran for much of its energy needs — remains opposed.

The letter questioned the rationale of Tehran's assertion that it had started the higher enrichment project to provide fuel to a research reactor providing medical isotopes for cancer patients.

"If Iran goes ahead with this escalation, it would raise fresh concerns about Iran's nuclear intentions, in light of the fact that Iran cannot produced the needed nuclear fuel in time" to refuel the research reactor, said the letter.

Iran's decision to enrich to the 20-per cent level is "wholly unjustified, contrary to U.N. Security Council resolutions and represent(s) a further step toward a capability to produce highly enriched uranium," said the letter to IAEA chief Yukiya Amano.

The 20-per cent mark represents the threshold between low-enriched and high-enriched uranium.

Although warhead material must be enriched to a level of 90 per cent or more, just getting its present low-enriched stockpile to the 20 per cent mark would be a major step for Iran's nuclear program. While enriching to 20 per cent would take about one year, using up to 2,000 centrifuges at Tehran's underground Natanz facility, any next step — moving from 20 to 90 per cent — would take only half a year and between 500-1,000 centrifuges.

Since its clandestine enrichment program became known eight years ago, Iran has insisted it is meant only to generate nuclear fuel. But its secrecy and refusal to co-operate with an IAEA probe of allegations that it experimented with aspects of a weapons program had increased concerns even before Ahmadinejad's Feb.7 announcement that Iran will raise the enrichment bar.

Announcing the installation of the more advanced centrifuges on Tuesday, he said Iran "will use them in the near future." In December, Iran said the country had plans to put such machines into use by early 2011.

Ahmadinejad shrugged off the possibility of new U.N sanctions. "They know that resolutions are not worth a penny and have no effect," he said.