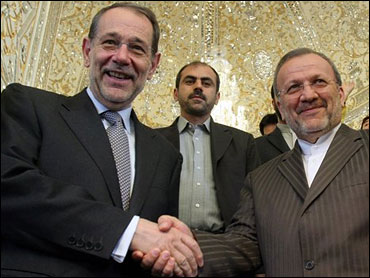 Diplomats said the incentives included a previously undisclosed offer of some U.S. nuclear technology on top of European help in building light-water nuclear reactors. Other incentives include allowing Iran to buy spare airplane parts and support for joining the World Trade Organization.

Tehran is under intense international pressure to accept the deal in exchange for putting on hold a uranium enrichment program that the West fears could lead to the creation of nuclear weapons.

Iran's top nuclear negotiator, Ali Larijani, said the proposals had "positive steps" — but that talks were needed to clear up ambiguities. Iran promised to study the proposals seriously, but gave no timeframe for a response.

"We will see if the Iranians take our offer seriously," the president said in Laredo, Texas. "The choice is theirs to make. I have said the United States will come and sit down at the table with them so long as they are willing to suspend their enrichment in a verifiable way."

One diplomat in Vienna described the U.S. offer of nuclear technology as particularly significant because it would, in effect, loosen a decades-long American embargo on giving Iran access to "dual use" technologies — equipment with both civilian and military use.

Crucially, the deal does not demand that Iran outright give up its uranium enrichment program — only suspend it, although likely for a long time. Two earlier diplomatic initiatives by Europe and Russia crumbled over the past year because each demanded Iran scrap enrichment completely — a stumbling block because of the program's wide popularity with the Iranian public.

Iran's leaders fiercely defend their nuclear program as a source of intense national pride, and say the purpose of the enrichment program is to create fuel for electricity — not nuclear weapons, as the United States claims.

Enrichment is the centerpiece of a nuclear program that the Iranian government has touted as a technological achievement, proving Iran is on a level with developed Western nations. Iran has dismissed past demands that it give up its right to enrichment as an arrogant insult from Western nations afraid of a high-tech Muslim nation. But it has signaled it would accept some limits.

The latest proposal was revealed a week after Washington changed strategy on Iran and — in an apparent acknowledgment that it lacked support for sanctions against the Islamic republic — conceded to entering into direct talks with Iran under certain conditions. The latest proposal appeared to be even more of a concession on the Bush administration's part — a major attempt to sweeten the package for Iran in a bid to win concessions over the nuclear program.

Most important, the United States is now offering to provide Iran some nuclear technology, diplomats in Vienna told The Associated Press. They spoke on condition of anonymity in exchange for discussing some details of the package.

It had been known that the deal included European offers of help in building light-water nuclear reactors for a peaceful energy program. But there had previously been no suggestion the Americans would also agree to help build a nuclear program for a country they frequently paint as a threat to world security.

"The incentives program is designed to give Iran a face-saving way to avoid being hauled before the Security Council and to defuse the crisis," said CBS News foreign affairs analyst Pamela Falk from the U.N. "It is essentially a 'carrot-without-stick' offer, avoiding mention of what happens if Iran does not comply."

"The incentives for Iran have begun to mount up to what may be a package they may find hard to rebuff," Falk added, "including direct talks with the U.S. in a multinational setting, Boeing and Airbus aircraft parts, and limited nuclear technology."

John Wolfsthal, a nonproliferation analyst at the Center for Strategic and International Studies in Washington, said any such offer would be tied to strict monitoring conditions.

"Iran has to be fully compliant in terms of inspectors on site, cameras and tracking equipment," Wolfsthal said. "All that is standard operating procedure with countries with light-water reactors."

In Washington, State Department Sean McCormack declined to go into specifics of the proposal. He said diplomacy "is at a sensitive stage" and the United States wants Iran to have a chance to review the proposal without having it discussed publicly.

He refused to offer a time frame, but said the Iran's timetable to consider the package was "weeks, not months."

Asked about reports that the offer of Western technology includes U.S. technological assistance, McCormack said: "Well, I've seen a lot of reports flying around the past couple days about what may or may not be in this package. I would just caution everybody, until we actually are able to discuss what is in the package in public, take reports with a grain of salt."

U.S. officials, speaking on condition of anonymity in exchange for discussing details, said that the United States and Europe agreed to back Iran's membership in the World Trade Organization,

The United States would also lift some sanctions — including allowing Iran to buy the much-needed airplane parts — and join with Europeans in direct negotiations with Iran over the future of Iran's nuclear program.

Diplomats said Monday that the United States additionally agreed to open the door for Europe to sell Tehran new Airbus planes. Iran's commercial fleet is largely made up of Boeing jets purchased before the 1979 revolution, and Tehran frequently complains that the U.S. ban on parts has undermined safety. U.S. pressure has also forestalled Iranian attempts to purchase new Airbus aircraft.

"The proposals contain positive steps and also some ambiguities, which must be removed," Larijani said afterward.

Larijani did not identify the ambiguities but said he discussed them with Solana and that more talks would be required. "We hope we will have negotiations and deliberations again after we have carefully studied the proposals," he said.

Foreign Minister Manouchehr Mottaki said Iran would give the proposals "careful study" and then "we will inform our friends of Iran's views."

Solana said of the meeting: "I have a feeling that it has been very, very constructive," and said the two sides would have more contacts in the coming days.

In the talks, Solana also "carried a message" about potential penalties if Iran refuses the offer. But he withheld telling the Iranians the specific threats — including the possibility of U.N. sanctions — so as not to jeopardize the "positive" atmosphere, said one diplomat in Vienna.

If Tehran does not accept, the package threatens Iran with a travel ban against its ruling religious leaders and government officials involved in the nuclear program, plus a freeze of Iranian financial assets abroad, U.S. officials and diplomats in Vienna have said.

The current package's lack of a demand for scrapping enrichment entirely could prove key, said Iranian political analyst Mostafa Kavakebian, who predicted Iran would accept temporary suspension of uranium enrichment but would reject any permanent halt.

In past days, Iranian leaders have combined tough talk with signals that they are open to a deal — perhaps an attempt to portray to the Iranian public that they remain firm, even as they consider reversing their refusal to suspend enrichment.