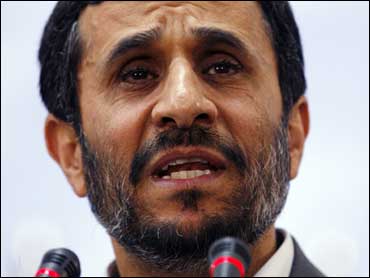 A bill that would allow men in Iran to take additional wives without the consent of their first wife has generated so much controversy that parliament had to postpone a vote for more debate.

Polygamy is not practiced in mainstream Iranian society, but the government of hard-line President Mahmoud Ahmadinejad has pursued amendments to a landmark women's rights bill to allow multiple marriages, as it seeks to enshrine elements of Islamic law into the country's legal system.

The Family Protection Bill was drawn up by the judiciary with the intention of allowing women to serve as judges for the first time since the 1979 Islamic revolution. As initially drawn up, it would also impose prison sentences for men who marry girls before they have reached legal age.

But the government's push to add articles allowing multiple marriages without the first wife's consent raised so much ire from women's rights groups and the judiciary that a vote in parliament had to be postponed Tuesday.

In all countries in the region it is permitted under Islamic law for a man to take up to four wives. Some countries, however, like Syria and Tunisia, apply secular legislation that requires the first wife's consent in an effort to limit the practice.

In Iran, the practice is frowned upon by most people.

Another government amendment that drew objections from the judiciary is an article that would introduce a tax on the money grooms pay to wives upon marriage under Islamic law. Opponents say the government should not be allowed to get its hands on that money.

Rights groups say the postponement of the vote is a significant victory for women, but hard-liners, including some conservative female lawmakers, say they will fight to include it in the parliament's agenda again for a vote soon.

Shahroudi said the amendments have overshadowed the pro-family articles in the bill drawn up by the judiciary.

"The dowry tax was unnecessary. It is harmful to women ... (the other part) should be amended and debated away from controversy," he told judges Monday.

"That the parliament postponed the vote is a significant victory for women in Iran," said women's rights activist Farzaneh Ebrahimzadeh. "But we have to fight on. The bill may return to the parliament for a vote but we have to make sure that articles reducing the rights of women are deleted."

Hard-line lawmaker Fatemeh Alia said in remarks published Thursday that she and other conservative lawmakers won't give in and will fight for a vote in the parliament soon.

"Lawmakers will never give up drawing up Islamic laws ... and won't give in to mudslinging by a group of secularists gathered around those obtaining gifts from aliens," Alia was quoted as saying by the daily Etemad-e-Melli. She was referring to Ebadi, who received the Noble Peace Prize in 2003.

Hard-liners have condemned Ebadi, accusing her of working for the interests of Iran's enemies.

Iran has refused to ratify the U.N. convention on women's rights, and the country's senior clerics in Qom, Iran's main center of Islamic learning, have rejected the convention as un-Islamic.

Under the strict form of Islamic law practiced in Iran, a woman needs her husband's permission to work or travel abroad. And a man's court testimony is considered twice as important as a woman's.

In September 2006, Iranian activists launched a campaign to try to change laws that deny women equal rights in matters such as divorce and court testimonies.

But despite being shut out of the nation's highest political posts, Iran's 35 million women have greater freedoms and political rights than women in most neighboring Arab states, including the right to vote and hold public office.

Those freedoms got a boost with the 1997 election of former President Mohammad Khatami, a reformist who appointed a female vice president.

Since then, other women have held positions within the government but have not been Cabinet ministers. And while women in Iran can run for parliament, they're prohibited from running for president.