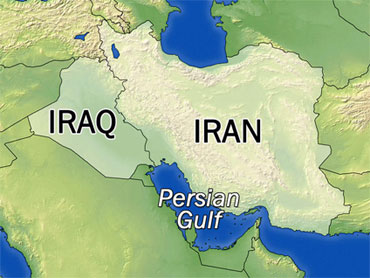 Iran state TV said today that Iranian forces crossed into neighboring Iraq and killed 30 fighters from a group it claims was involved in last week's bombing of a military parade.

The report quotes a general of the elite Revolutionary Guards as saying the "terrorists" were killed yesterday in a clash "beyond the border," and that his forces were still in pursuit of two men who escaped the ambush.

While Iran has said in the past it would target armed groups on Iraqi soil, this is a rare case of it actually admitting to an attack.

Iraqi officials have complained in the past about Iranian artillery targeting armed Kurdish opposition groups on its soil.

An explosion during a military parade in the town of Mahabad, in Iran's northwestern Kurdish region, killed 12 women and children on Wednesday.

The parade was one of several held around the country to mark the 30th anniversary of the start of the Iran-Iraq war.

The city of Mahabad is home to 190,000 people - most of them Kurds and Sunni Muslims. Iran is predominantly Shiite.

Iran has already blamed the attack on Kurdish separatists who have fought Iranian forces in the area for years. But most Kurdish groups condemned the attack, and no one has so far claimed responsibility for it.

Government forces in Iraq, Iran and Turkey have all periodically battled with the Kurdish minorities straddling their borders. They fear the groups are seeking to unite territory in all three nations to form an independent Kurdish homeland.