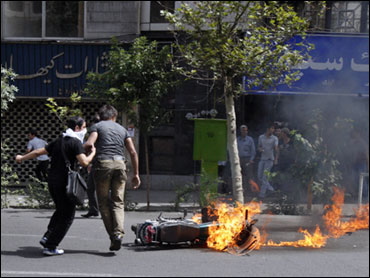 Iranian President Mahmoud Ahmadinejad called his re-election "real and free" and said it cannot be questioned.

Ahmadinejad made the comments Sunday during a press conference - his first since the government announced that he was re-elected to a second term in a landslide victory during Friday's vote.

On Saturday Interior Minister Sadeq Mahsouli, an Ahmadinejad ally, declared the president had been re-elected with 62.6 percent of the vote, against 33.7 percent for reformist candidate Mir Hossein Mousavi.

But his top opponent accused the government of extensive vote rigging, and many of his supporters have clashed with police in Tehran's streets, the worst signs of unrest in a decade.

"So far I haven't seen anyone with proof (that there was a fraud in the election)," Ahmadinejad said today. "They just say 'The result was against our expectations.' Then you should change your expectations."

Hundreds of Mousavi supporters took to the streets of the capital in a fresh wave of protests on Sunday morning.

About a mile away from Ahmadinejad's press conference, young Iranians set trash bins, banks and tires on fire; riot police beat them back with batons.

"Down with dictator," the protestors cried.

Tens of thousands of people were thought to have taken part in the post-election riots and fatalities had been reported.

Iran restored cell phone service that had been down in the capital since Saturday. But Iranians still could not send text messages from their phones, and the government increased its Internet filtering in an apparent bit to undercut liberal voices.

Web sites linked to Mousavi, who declared himself the true winner of Friday's presidential race
and urged backers to resist the government, were down. Social networking sites including Facebook and Twitter were also not working.

The restrictions were likely intended to prevent Mousavi's supporters from organizing large-scale protests.

But several small groups took to the streets, according to witnesses. About 300 Mousavi supporters gathered outside Sharif University, chanting "Where are our votes?"

One senior police official said that "a number of disruptive organizations would be arrested soon."

Ahmadinejad also accused foreign media of launching a "psychological war against" against the country.

The protests are being the called the biggest civil signs of civil unrest seen in the country since the revolution, Global Radio News reporter Austin Mackell told CBS News. "There's a symbol that we've seen around, which is a green handprint, and that's reminiscent of the 1979 revolution when people would put handprints of blood on the walls to show their support of the revolution."

Mackell told CBS that signs were evident even before the election. "It was a really beautiful thing, you had pro-Mousavi and pro-Ahmadinejad people having very peaceful, vivid debates in public. But there was also lots of street demonstrations and stuff like that. Even then people were saying they hadn't seen anything like it since the revolution in 1979. And when I was out yesterday amongst the protestors, that was the word on their lips: Revolution.

"There's such a diversity amongst the protestors," Mackell said. "I mean, there are people who are shouting 'Allahu Akbar' as they protest and there are other people shouting 'Down with Islam.' You've got a full range of people. There's a lot of pent-up aggression, there's frustration and sort of dashed hopes."

Mackell says the crackdown on protests has also extended to journalists, making it almost impossible for the media to cover the story. "I saw yesterday a Japanese camera crew who have full government permission and were working with an approved government translator, still were beaten and arrested by the police for filming at a protest. That kind of thing is happening to a lot of people. Journalists are having their cameras taken.

"There's been a decision not to extend any press visas. None of the foreign press are going to have their visas extended. And because the visas are only given out for a week to ten days to start with, that means very shortly all of the foreign press will be gone, except for those who have bureaus here.

"I wouldn't say the police have been showing restraint, they're been really going hard after the protestors, but after the foreign press goes, who knows what will happen.

Just prior to the election, Tehran's most famous boulevard was the scene of joy and celebration as supporters of moderate candidate Mirhossein Mousavi vented their desire for social and political change in the Islamic Republic.

On Saturday evening, the area had turned into a smoldering battlezone.

The protests were a rare direct challenge to Iranian authorities. The result and its violent aftermath raised fresh questions about the direction of Iranian policies at a time when U.S. President Barack Obama wants to improve relations with Iran.

"It was really so painful for us," said Sanaz Sarsharzadeh, an Iranian-German resident of Tehran. "I was in Vanak Square and I saw that many people, so many young people that the soldiers - the big monsters - they beat them and attacked the lovely people. I don't know... I can't explain that.

"I'm thinking about leaving the country because I don't know what's going to happen to us. We don't have any security. … the way the police was behaving to our people was cruel."

Younis Bado, a resident of Tehran, said, "I hope that people win in this fight because we don't like this. All the people and I don't like the president, Mr. Ahmadinejad."

In Brussels, the European Union expressed concern over how Iran's presidential elections have been conducted, and France's foreign minister on Sunday condemned the police response to street protests in Tehran.

(AP Photo/Bas Czerwinski)
(Left: About 250 demonstrators turned out in The Hague, Netherlands on Sunday June 14, 2009, to protest the outcome of the presidential election in Iran.)

The 27-nation EU said it was "concerned about alleged irregularities" during Friday's vote and post-election violence that erupted after the release of results Saturday.

The EU in a statement released late Saturday said it hopes the outcome of the elections will ease tensions between Iran and the international community over its nuclear program.

French Foreign Minister Bernard Kouchner told reporters Sunday his government is "very worried" about the situation in Iran and criticized "the somewhat brutal reaction" by authorities in response to demonstrations.

Kouchner warned that the aftermath of the election "could leave lasting scars" and urged Western governments to engage with Iranians and win their trust.