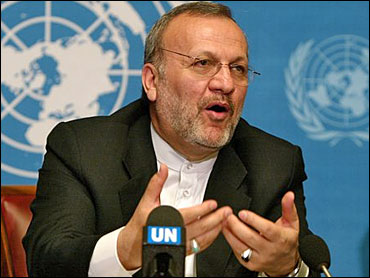 Iranian Foreign Minister Manouchehr Mottaki said Saturday that a breakthrough over Tehran's nuclear program was possible and welcomed unconditional talks with all parties, including the United States.

"We think that if there is good will, a breakthrough to get out of a situation they [the European Union and United States] have created for themselves... is possible," Mottaki told a press conference.

"We will also mention if any part of the package is not in Iran's interests," he said.

Mottaki said European Union foreign policy chief Javier Solana would hand deliver the package to Iranian officials in the next few days. No specific date has yet been set for the trip, he said.

In Belgium, Solana's spokeswoman Cristina Gallach confirmed he was ready to travel to Iran very soon. "The trip is not going to be a negotiating trip, the objective is to present the proposals of the international community," she said.

Iran would study the package "within the necessary timeframe," Mottaki said.

In a rare show of optimism, the foreign minister stressed that a settlement could be reached on the nuclear issue.

"We think that the views we will present our partners could prepare the ground for a comprehensive understanding (between Iran and the West)," he said, referring to the EU nations as partners in a sign that Iran is willing to find a solution to the nuclear standoff.

The package, agreed upon Thursday by the five permanent members of the U.N. Security Council and Germany, carries the threat of U.N. sanctions if Tehran remains defiant over its nuclear program which the West fears is a cover for producing nuclear weapons. Iran says it is only striving to use nuclear reactors for generating electricity.

Meanwhile, the Vatican called for diplomacy as the only way forward to resolve the international standoff over Iran's nuclear program. In a statement Saturday, the Vatican said it supports every initiative aimed at open and constructive dialogue and called on all sides involved to show sensitivity, goodwill and mutual trust to resolve the dispute, reports CBS News correspondent Sabina Castelfranco.

Also, Pope Benedict met in private with British Prime Minister Tony Blair at the Vatican and discussed the role religion can play in politics and society. They agreed on the importance of dialogue between faiths and cultures to tackle extremism and terrorism, Castelfranco reports.

A short statement issued Thursday night did not mention economic sanctions, but U.S. officials said privately that Iran could face tough Security Council sanctions if it refuses to give up uranium enrichment and other disputed nuclear activities.

The formal offer of talks is expected to be made by France, Britain and Germany, the three EU nations that previously negotiated with Tehran.

A senior U.S. state department official said he expected Tehran would be invited to begin new negotiations "within a matter of days."

The United States, in a major policy shift, agreed this week to join those talks on the condition that Tehran suspends all uranium enrichment and related activities. It would be the first major public negotiations between the two countries in more than 25 years.

Mottaki insisted Saturday that Iran would join no talks if conditions were attached.

"Member states of the board of governors at the International Atomic Energy Agency can be parties for talks," added Mottaki.

The U.S. is on the board of governors of the IAEA, the U.N.'s nuclear watchdog.

Mottaki said Iran had its own views on how to conduct the talks. He did not elaborate, saying Tehran would make its position known once the talks develop.

Iran announced April 11 that it had enriched uranium for the first time, using 164 centrifuges. Enrichment can produce either fuel for a nuclear reactor or material for a warhead - but tens of thousands of centrifuges are needed to do either on a large scale.

Iran intends to move toward large-scale uranium enrichment involving 3,000 centrifuges by late 2006, and then expand the program to 54,000 centrifuges.

Iran maintains that as a signatory to the Nuclear Nonproliferation Treaty it has the right to enrich uranium for peaceful purposes - such as the production of reactor fuel.

However, Iran has indicated that it may suspend large-scale uranium enrichment to ease tensions.