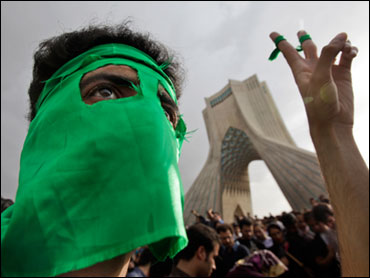 Government opponents shouted "Allahu Akbar" and "Death to the Dictator" from Tehran's rooftops in the pouring rain on the eve of student demonstrations planned for Monday. Authorities choked off Internet access and warned journalists working for foreign media to stick to their offices for the next three days.

The measures were aimed at depriving the opposition of its key means of mobilizing the masses as Iran's clerical rulers keep a tight lid on dissent. Government opponents are seeking, nonetheless, to get large numbers of demonstrators to turn out Monday and show their movement still has momentum.

Opposition leader Mir Hossein Mousavi threw his support behind the student demonstrations and declared that his movement is still alive. A statement posted on his Web site said the clerical establishment cannot silence students and was losing legitimacy in the Iranian people's minds.

"A great nation would not stay silent when some confiscate its vote," said Mousavi, who claims President Mahmoud Ahmadinejad stole the June 12 election victory from him by fraud.

Supreme Leader Ayatollah Ali Khamenei, who has final say on all state matters, accused the opposition Sunday of exposing divisions in the country and creating opportunities for Iran's enemies.

Iran's universities have been strongholds of the opposition movement that grew out of the disputed election, and authorities have besieged campuses nationwide with a wave of arrests and student expulsions. The pro-government Basij militia has also recruited informers on campuses to blow the whistle on any opposition troublemakers, according to students.

Despite heavy rain Sunday night, rooftop cries of "Allahu Akbar" or "God is Great" and "Death to the Dictator" were heard from many parts of the capital Tehran on Sunday night. The protest reprised one of the main tactics of the anti-shah movement in the 1979 Islamic Revolution and was revived in the days and weeks after the disputed elections.

The rooftop chants had not been heard since the opposition's last attempt to mobilize, a Nov. 4 rally coinciding with state-sanctioned events to mark the anniversary of the 1979 U.S. Embassy takeover. That demonstration drew far fewer protesters than at the height of the summer's unrest. But it still provoked a violent response from security forces.

For weeks after the disputed June presidential election, demonstrations triggered by claims of massive fraud in the vote brought hundreds of thousands to the streets, but the relentless crackdown that followed has taken a heavy toll.

Seeking to deny the protesters a chance to reassert their voice, authorities slowed Internet connections to a crawl in the capital, Tehran. For some periods on Sunday, Web access was completely shut down - a tactic that was also used before last month's demonstration.

The government has not publicly acknowledged it is behind the outages, but Iran's Internet service providers say the problem is not on their end and is not a technical glitch.

Former President Akbar Hashemi Rafsanjani, who has been a powerful voice of dissent from within the ranks of the clerical leadership, accused Iran's hard-line rulers of silencing any constructive criticism.

"The situation in the country is such that constructive criticism is not tolerated," Rafsanjani was quoted by several news agencies as saying in reports on Sunday.

Throughout Iran's postelection crisis, Rafsanjani has appeared to side with critics alleging that the vote that gave Ahmadinejad a second term in office was rigged.

Seeking to confine journalists working for international media to their offices during the protests, Iran's Culture Ministry suspended accreditation allowing them to report from the streets from Monday to Wednesday.

Reporters have been among those arrested in the postelection security sweeps, as the government has sought to control the media landscape.

Paris-based Reporters Without Borders said in statement Saturday that 28 journalists and bloggers are currently being held - including two arrested last week: a blogger supporting women's rights and a reporter for a business daily.

The group said reporters have been repeatedly threatened, summoned by the intelligence services and given long prison sentences after questionable judicial proceedings.

Largely swept off the streets, the opposition relies on the Web and cell phone service to organize rallies and get its message out.

The call for Monday's demonstrations was put out on dozens of Web sites run by supporters of opposition leaders Mousavi and Mahdi Karroubi, who both ran against Ahmadinejad in the June 12 election. Most of those sites have been repeatedly blocked by the government, forcing activists to set up new ones.

Monday's demonstrations mark the anniversary of the 1953 killing of three students at an anti-U.S. protest during the rule of Shah Mohammad Reza Pahlavi, a close American ally.

Since the 1990s, that anniversary has served as an occasion for protests by those urging Iran's Islamic leadership to allow more social and political freedoms.

Signs have mounted in recent days of a potentially explosive confrontation, especially if the protesters take their demonstrations off campuses. Extra police and other security personnel were deployed around Tehran University Sunday, and the nation's police chief, Gen. Ismail Ahmadi Moghaddam, warned that security forces will crush any protests.

"If any unauthorized gatherings take place outside the universities, police will confront them," Moghaddam was quoted as saying by the semi-official Fars news agency.

Students say there is a government campaign to not only keep a handle on security on campuses but also to control ideas. Some courses seen as too Western-based have been replaced with more "Islamic" ones. And morals police in universities have been stopping women at campus gates for wearing clothes that are too colorful or not all-covering enough.