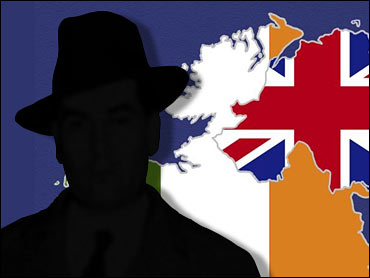 The top British mole within the Irish Republican Army — a man code-named "Stakeknife" who played a central role inside the outlawed group for decades — has fled Ireland after being exposed, several newspapers reported Sunday.

For years, the identity of a suspected secret agent has been the subject of intense, fearful speculation within the ranks of the IRA and its allied Sinn Fein party.

Reports in Sunday newspapers in Dublin, London and Belfast identified the agent as Alfredo "Freddy" Scappaticci, the IRA's longtime director of internal security. That position would have given him ideal cover as the officer responsible for identifying, torturing and killing traitors to the paramilitary force.

"He was the key player in IRA operations right across Northern Ireland," a former police-paid informer on IRA activities told Britain's Channel 4 News.

"As an agent this man would have been absolutely number one. He could save lives but he could also take lives," said the former agent, who has given numerous media interviews using the alias Kevin Fulton.

These revelations have intensified one of Northern Ireland's greatest unfolding scandals: Britain's covert use of police and army spies to infiltrate and manipulate rival paramilitary groups in Belfast.

John Stevens, the London police chief who since 1989 has been probing allegations of state collusion with such outlawed groups, confirmed the existence of Stakeknife last month.

Stevens said he wanted to interview the agent about his relationship with the British army's spying arm in Northern Ireland, the Force Research Unit, and his possible role in IRA murders.

Private investigators have long alleged that Force Research Unit officers in 1987 learned that a Protestant extremist group, the Ulster Defense Association, planned to kill Scappaticci. To protect their key IRA insider, they allegedly used their top agent within the UDA to redirect the hitmen to a different IRA veteran with an Italian surname.

Last month, Stevens issued a report linking informers used by the Force Research Unit to Protestant militants' murder of Catholic lawyer Pat Finucane, who was shot numerous times in front of his wife and children.

The reports said Stakeknife lived in Belfast until recently, then relocated to a secret residence south of Dublin before fleeing this week to England — probably to the Force Research Unit's base in rural Dorset.

Dublin's Sunday Tribune newspaper said Stakeknife was in his 60s and worked as a British agent since 1978, several years after joining the IRA. The newspaper said the British unit paid him about $130,000 a year, although others estimated he was not as well-paid.

Several newspapers said Stakeknife was promoted to the IRA's general headquarters alongside current Sinn Fein leaders Gerry Adams and Martin McGuinness, and served through much of the 1980s and 1990s as head of the IRA's internal security unit.

The unit vetted potential members and brutally interrogated any IRA members or civilians suspected of passing information to British authorities.

Those found guilty usually had a forced confession audiotaped, then were shot through the head. The bodies of scores of victims were dumped — usually stripped naked, their heads bagged and their arms bound — by rural roadsides.

Commentators said Stakeknife would have been able to tell his British bosses the identity of every IRA member in Northern Ireland, and arrange for certain IRA personnel to be promoted — and others to be eliminated by being branded as informers.

"It looks like British intelligence was running the IRA in Belfast in the late 1980s," said Brian Feeney, the author of a history of Sinn Fein and the IRA.

Sinn Fein refused to comment on the allegations, but one of Stakeknife's alleged victims, Danny Morrison, said he wouldn't believe the reports until he sees "some sort of proof."

Morrison was Sinn Fein's senior spokesman until 1990, when police arrested him for taking part in the torture of an IRA informer. Sunday's reports said Stakeknife had alerted his British handlers of the informer's interrogation and the likelihood that Morrison would become involved. Morrison served five years in prison.

David Trimble, who leads the major Protestant party, the Ulster Unionists, defended the British intelligence community's recruitment of agents like Stakeknife, even though they may have taken part in murders to maintain their cover.

"It is the key way in which the paramilitaries have been ground down and brought close to defeat in Northern Ireland," Trimble said. "The authorities' job is to get intelligence. That means 'turning' people who are members of paramilitary organizations or finding someone who will penetrate them."

The IRA, which began bombing and shooting in 1970 in hopes of abolishing Northern Ireland as a British territory, killed about 1,800 people. The group, which has an estimated 500 members, has been largely observing a cease-fire since 1997.

The power-sharing government in Northern Ireland has been suspended in a dispute over IRA weapons. All militant groups in the north are supposed to disarm under the 1998 Good Friday agreements.

The IRA has surrendered control of two caches of arms and has committed to full disarmament, but the British and Irish governments have demanded more concrete steps.

The unmasking of Stakeknife is just the latest evidence that British intelligence had numerous inroads into militant Irish republicanism.