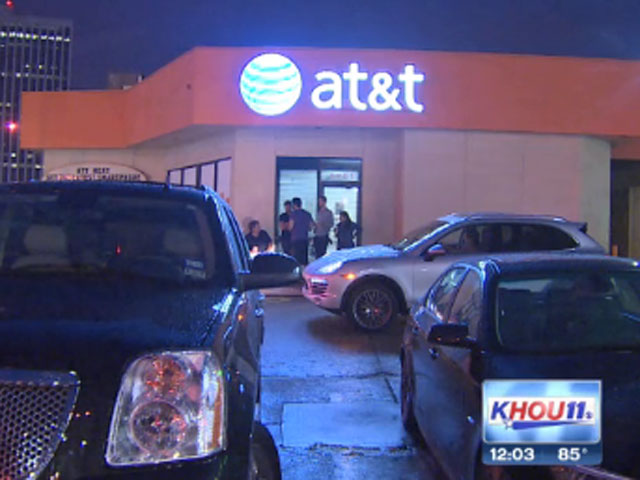 (CBS) HOUSTON - Several people waiting in an early-morning line for the release of the new iPhone were robbed at gunpoint Friday, police in Houston say, reports CBS affiliate KHOU.

Police say people were camped outside an AT&T store in Houston when they were approached by two armed men at around 5 a.m. One of the victims told the station the suspects walked up and started making demands.

One of the suspects said "Gimme everything you've got," one of the victims told the station. The victim said the alleged burglars made off with several iPhones and an iPad. The men also robbed at least one other customer of a wallet before getting back in their car and speeding away, KHOU reports.

Witnesses said about 10 people were in line when the robbers hit but no one was hurt in the incident.

Security cameras in the shopping center may have captured the suspects on video, but a detailed description of the men was not immediately available, according to the station.

Police said stolen credit cards were used at a gas station in Bellaire just minutes after the robbery. The suspects were said to be driving a late-90s green Honda Accord.

When AT&T was made aware of the situation, the company reportedly offered the victims store credit for the value of their stolen iPhones.