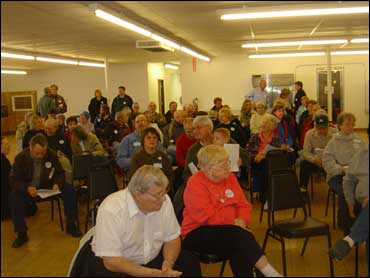 There's a line from The Music Man: "You really ought to give Iowa a try."

It's a state of pioneers: the birthplace of movie legend John Wayne and polling innovator George Gallup. It's also the ultimate political swing state, going blue for Al Gore in 2000, but red in 2004 for President Bush.

"Iowa has a wide variety of viewpoints," said Scott Brennan, Iowa Democratic Party Chair. "Look at our two longtime senators. We have Sen. (Tom) Harkin who's a long time proud progressive and look at Sen. (Charles) Grassley who is a long time proud conservative."

And the more closely America looks at Iowa, the more we see the similarities - and big differences - between caucus country, and the rest of the country.

Iowans are about twice as likely to live in rural communities. While 31 percent of Americans are racial and ethnic minorities, only about 7 percent of Iowa is non-white. This state is No. 1 in the nation in pork, corn, soybeans, and eggs, but almost last in young people.

"Iowa has proportionately higher percentages of people over the age of 65 than many other states," said Pollster Ann Selzer. "It has to do with younger people leaving the state. That they find opportunities elsewhere."

Since the 1980's, the rise of evangelicals has also transformed GOP politics here.

"They play a major role," said Iowa Republican Party executive director Chuck Laudner. "Over half of our caucus goers are going to be social conservatives and identify themselves as such."

Agribusiness is shifting to just business in the Eastern part of the state, where younger Iowans are filling white collar and high-tech jobs. These more urban voters though tend to be Democrats, and many are straddling two worlds.

"The image that people have of Iowans with pitchforks in their hands is just quite outdated," Selzer said.

Rural or urban, Eastern or Western, Iowans are all focused on energy in a state that produces 30 percent of the nation's ethanol.

"We make ethanol and soy diesel. That's a major issue," one Iowan said.

"There's such a big concern about global warming. environmental issues," said another.

Perhaps the best argument for Iowa's starring role in the presidential process is that time gives Iowans have the rare opportunity to really get to know these candidates up close and personal.

"It's not very often that you can be at dinner and have Hillary Clinton come sit in the booth next to you," one voter said.

"We just don't show up a few days before the caucus, make our decision and move on. They really take this seriously but we want to get it right because we know the results punch two or three tickets to New Hampshire," Laudner said.