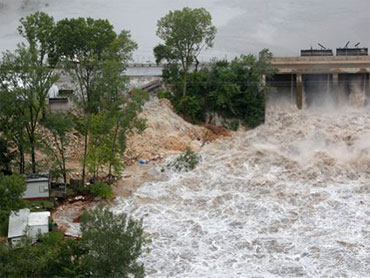 The Lake Delhi dam in eastern Iowa failed Saturday as rising floodwater from the Maquoketa River ate a 30-foot-wide hole in the earthen dam, causing water to drop 45 feet to the river below and threatening the small town of Hopkinton.

Northeast Iowa has been inundated with torrential rain in recent days with as much as 9 inches being reported in some locations. The heavy rain has pushed the Maquoketa River to 23.92 feet - more than 2 feet above its previous record of 21.66 feet in 2004.

Jack Klaus, a spokesman with the Delaware County emergency management office, said warning sirens were sounding in Hopkinton as water began to surround homes there Saturday afternoon. Areas below and above the dam had been evacuated, including numerous cabins and homes - as many as 700 - above the dam because of high water.

"There's going to be significant losses of property there," Klaus said.

Some campers and residents on the lake had to be rescued overnight. Some people suffered some bumps and bruises but Klaus said no serious injuries were reported.

About 20 miles farther downstream in Monticello, the Jones County Fair was being held. The fairgrounds are along the river on the northside of Monticello, a town of about 3,600 people, and activities and concerts for later Saturday were canceled.

There also were some nearby neighborhoods that could be affected.

North of Lake Delhi, the river flooded several buildings in downtown Manchester and utility service was turned off to about 50 homes affected by the flooding.

Klaus said there was significant damage to county roads and the county had run out of barricades to block them off.

"We're warning people to stay off the roads," Klaus said. "We can't guarantee their condition."

Donna Dubberke, a meteorologist with the National Weather Service in Davenport, said areas below the dam will see an initial crest in the river caused by the dam's failure followed by a secondary crest as the high water above the dam made its way downstream.

"There will be initial wave from the sudden shot of water and a secondary shot behind it from the rainfall," she said.