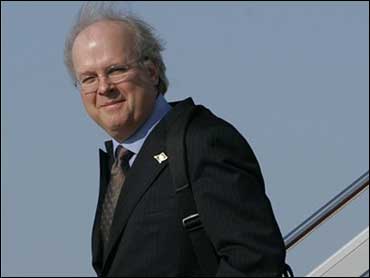 Rove was in Des Moines to speak at a fundraiser.

A news release says a retired minister and three members of the Des Moines Catholic Workers community were cited for trespassing and released.

The four accused Rove of election fraud and conspiracy to commit offense or to defraud the United States in the time before the Iraq war.

The arrest complaint also says they accused Rove of treason, sedition and subversive activities for fraudulent acts leading to the deaths of 300,000 Iraqi civilians and 4,000 U.S. Military personnel.

Kirk Brown and Mona Shaw, two of the four arrested Friday, attempted a similar arrest last March when Rove spoke at the University of Iowa.