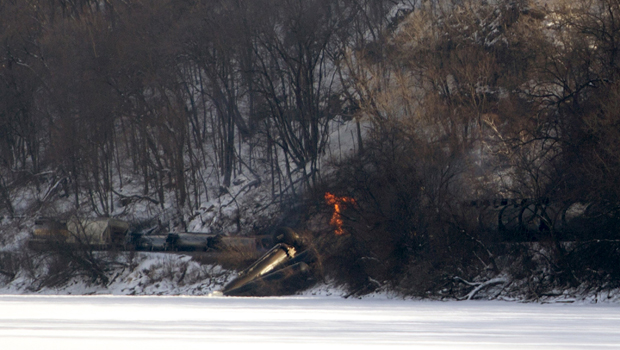 DES MOINES, Iowa -- Railroad officials said Thursday it's unclear how much ethanol has leaked into the Mississippi River from a train that derailed a day earlier in eastern Iowa, but that they were working to monitor the environmental impact and offload fuel from the train.

The cars went off the tracks Wednesday morning in a remote area about 10 miles north of Dubuque. Canadian Pacific spokesman Jeremy Berry said 14 derailed cars were carrying ethanol, and eight of them appeared to be leaking.

"We have verified some ethanol has reached the water but we do not have an estimate of how much," said company spokesman Andy Cummings, who was at the scene Thursday morning.

Federal and state environmental agencies are working with the company to set up ethanol monitoring sites downriver. Unlike oil, which floats on water, ethanol mixes with water and dilutes as it gets further from the spill site, which can deplete the oxygen in water in high concentrations and kill fish, said Iowa Department of Natural Resources spokesman Kevin Baskins.

Local authorities said three cars caught fire and three others plunged into the river. The fires had been extinguished by Thursday morning, and no injuries have been were reported. The 81-car train was heading east on CP tracks.

The derailment occurred in an area inaccessible by road, forcing crews to build a temporary access road to get equipment to the tracks. Cummings said officers were planning to get in a boat to assess the spill from the water, but that frozen sections and ice in the river could be an issue.

Baskins said his department notified the cities of Davenport, Burlington and Keokuk, which are downriver and use the Mississippi River as a drinking water source, as a precaution.

"Our efforts are focused on safety above all else. We will begin the process of transferring product from the derailed cars to empty cars at the site and safely remove derailed cars," Cummings said.