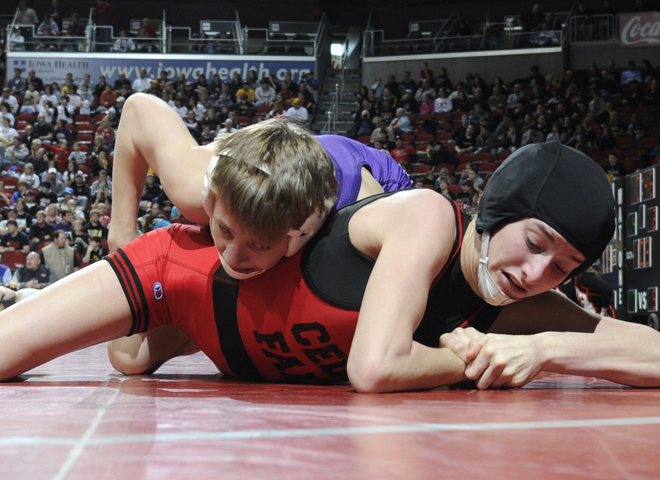 DES MOINES - An Iowa high school wrestler who became the first girl to win a state tournament match when her opponent refused to compete against her for religious reasons lost her quarterfinals match Friday.

Cedar Falls freshman Cassy Herkelman lost 5-1 on points to Indianola's Matt Victor in their 112-pound matchup. Despite the controversy Herkelman was thrust into when her first-round opponent defaulted rather than face her Thursday, there was little reaction from the roughly 6,000 Wells Fargo Arena spectators when she lost to Victor. There were several other matches taking place at the time.

Herkelman had a 20-13 record entering the tournament, but was deprived of the chance to show her skills when her favored opponent, sophomore Joel Northrup, defaulted rather than wrestle her. Northrup, who is home-schooled but competes for Linn-Mar High School, said wrestling a girl would conflict with his religious beliefs.

Herkelman and Ottumwa High School sophomore Megan Black were the first two girls to qualify for the tournament in its 85-year history.

Herkelman was expected to compete in a consolation round match later Friday.

Black was eliminated Thursday after losing both her matches.

Tournament organizers didn't make Herkelman or Victor available to the media after their match. They said Herkelman wouldn't discuss the tournament until she is finished competing.

On Thursday, Northrup said he respected Herkelman and Black but didn't think girls should compete against boys in wrestling. In a statement issued through his school, he called wrestling a combat sport and said "it can get violent at times."

High school and college wrestling draw huge crowds in Iowa, and the annual tournament in Des Moines is followed closely throughout the state.