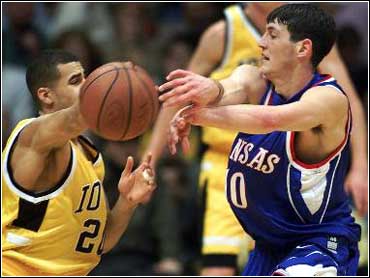 During every timeout against No. 15 Kansas, Iowa coach Steve Alford slammed his clipboard to the floor and yelled at the Hawkeyes loud enough to be heard 12 rows up from the court.

And the first-year Iowa coach said he was actually having fun.

That's because the Hawkeyes, despite being outrebounded 45-29, turned in a defensive gem in a 77-69 victory over the Jayhawks on Thursday night.

"I thought our kids did an incredible job on defense. I enjoyed watching our defense," said Alford, whose team held Kansas to 42.4 percent shooting and forced 22 turnovers. "Our kids understood their roles and did an excellent job."

Jacob Jaacks had 16 points and 10 rebounds and Rod Thompson sparked Iowa with 14 points off the bench as the Hawkeyes beat the Jayhawks for the second straight year.

"We've got to congratulate Iowa, especially in the second half. When there were key shots to be made, Iowa made them," he said.

Rob Griffin and Dean Oliver each had 10 points for the Hawkeyes (10-10), who withstood a career-high 21 points and 10 rebounds from Nick Collison, the freshman from Iowa Falls who ignored the jeering crowd that yelled "sell out" throughout the game.

Collison, who thought about attending Iowa but backed out during the coaching transition from Tom Davis to Alford, didn't want to talk about the crowd.

"I played all right, but it doesn't really matter. It doesn't make you feel any better," said Collison, whose previous best was 20 points against Pittburg State in December.

Kenny Gregory finished with 12 points for Kansas (16-5), which has lost three of four, including 74-66 at Iowa State last Saturday.

Unlike like last year's 85-81 victory in which Iowa fought back from an 18-point deficit over the final 12:52, the Hawkeyes never trailed by more than eight points and that was in the first half.

The Jayhawks rattled Iowa with their pressure, forcing 15 turnovers over the first 20 minutes while opening a 29-25 lead. But the Hawkeyes, who have won three of four, settled down in the second half, turning the ball over just twice.

Nick Bradford's three-point play early in the second half gave Kansas a 38-33 lead, but Iowa scored nine of the next 11 points to take a 42-40 lead its first since the opening minutes with 15:12 left.

A right-handed hook shot by Collison over Jaacks and then a putback by Collison fueled a 6-0 run that gave the Jayhawks a 55-51 lead with 8:50 left.

A jumper by Ryan Luehrsmann cut Kansas' lead to two and then Kyle Galloway hit a 3-pointer from the left wing for a 56-55 Iowa lead with 7:35 remaining.

Drew Gooden made one of two free throws to slice the Hawkeyes' lead to one before Galloway drilled another 3-pointer from the same spot that extended Iowa's lead to 60-56 with 5:14 to play.

Galloway's shot ignited a 12-4 run, capped by Jaacks' two free throws, that gave the Hawkeyes a 69-60 lead with 2:38 left and Kansas got no closer than six points the rest of the way.