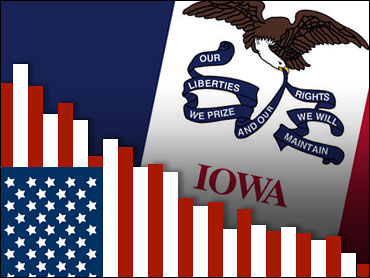 The Iowa caucuses are five weeks away, and while polls there have for weeks charted an improvement in Mike Huckabee's support (see the Iowa CBS News Poll), the former Arkansas governor still must overcome Mitt Romney's financial and polling advantages there.

But at least the votes that get taken at the Republican caucuses on January 3 will be straightforward in support of a candidate. In most places, caucus-goers write down their vote for a candidate on a secret ballot. Those votes are recorded and sent on to the state party for tabulation. There is a winner. But the Republican caucus process has a twist -- those straw votes are not binding: the delegates elected at local caucuses to go to county conventions on March 8 may or may not have the same preferences as the people who attended and voted at the caucuses.

In contrast, what Democrats do at their caucuses is directly related to who gets elected as a delegate to their county conventions on March 15. But the Democrats have a twist, too. Their caucus-goers have to state their preferences publicly, by sitting or standing with other attendees who share their candidate preference. And if there aren't enough people who do (a minimum 15 percent of the total attendance in most places, 20 percent in a few), they have to join another group, and support another candidate.

Pre-Iowa-caucus polls can tell us about those initial preferences. But it's harder to work out what those preferences mean for the Democratic delegate selection process (which will determine who wins). The three frontrunners (Hillary Clinton, Barack Obama and John Edwards) will probably meet the 15 percent threshold at nearly all caucuses, but supporters of other candidates could find themselves below the threshold in many places. And who those disappointed voters support on the second round may not necessarily be their true second preference, since they need to join up with enough other caucus-goers to equal 15 percent or more.

But there are other polling issues, too. There are no exit polls for the Iowa caucuses. Instead, there are "entrance polls." Voters are interviewed as they enter the caucus locations, so what gets tallied are their first preferences, with statewide totals estimated from those results. Entrance polls can't pick up what might happen inside, between the first-preference vote and the allocation of delegates. In 2004, some caucus-goers didn't or couldn't know that there had been an arrangement between the Kucinich and Edwards campaigns -- that they would merge their supporters in caucuses where one or the other didn't meet the threshold. That benefited Edwards, who finished a stronger second in the delegate totals than he did in the preference tallies, stronger than his second-choice entrance poll results suggested.

There are other reasons to treat the results of entrance polls with caution. In typical exit polls, tallies of the gender, race and apparent age of those not responding to the interview request are kept, and it is possible to adjust (and correct) the responses for those demographics. Historically, the largest non-response in exit polls has come from older voters. This often doesn't matter; it shouldn't matter if there is no difference in whom older and younger voters support. But historically that correction hasn't been made in the Iowa entrance polls. And this year, on the Democratic side, there is an age difference in candidate support. In the CBS News/New York Times Iowa poll, younger caucus goers -- those under the age of 45 -- favor Barack Obama: he gets 39 percent of their support, and Hillary Clinton 24 percent. The oldest caucus-goers -- those over 65 -- favor Clinton over Obama, 30 percent to 11 percent. Pre-election polls show less of an age difference among Republican caucus-goers.

In 2004 about 124,000 people attended Iowa Democratic caucuses, out of a statewide population of about 2,200,000 adults. Even if that Democratic turnout is matched on the Republican side (which might not happen, given the greater enthusiasm of Democratic voters this year), that would still mean a turnout of only 11 percent of the adult population. The hard part for polling is finding them in advance of the caucuses!

Using lists of past caucus-goers risks missing first-time attendees (who could make up as many as half the attendees). Using random-digit dialing (RDD) techniques could mean calling -- and reaching -- 10,000 households to interview only 500 attendees from each party. And relying on State-provided registered voter lists (although more efficient and less expensive than RDD) misses those who have changed phone numbers since they registered to vote, or who did not provide a phone number in the first place.

In addition, we know that people usually over-report their likelihood of participating, so making the estimate of who will attend may be more complex than usual. CBS News used a combination of past voting, self-report of attendance this year, and other questions to create its January Iowa estimate. We interviewed samples of Iowa adults from the registered voter list, from a random sample of numbers not from the list, and a small sample of cell phone numbers.

The fact that we and other polling organizations go to these lengths for accuracy shows how important Iowa is for the coming election.
By Kathy Frankovic