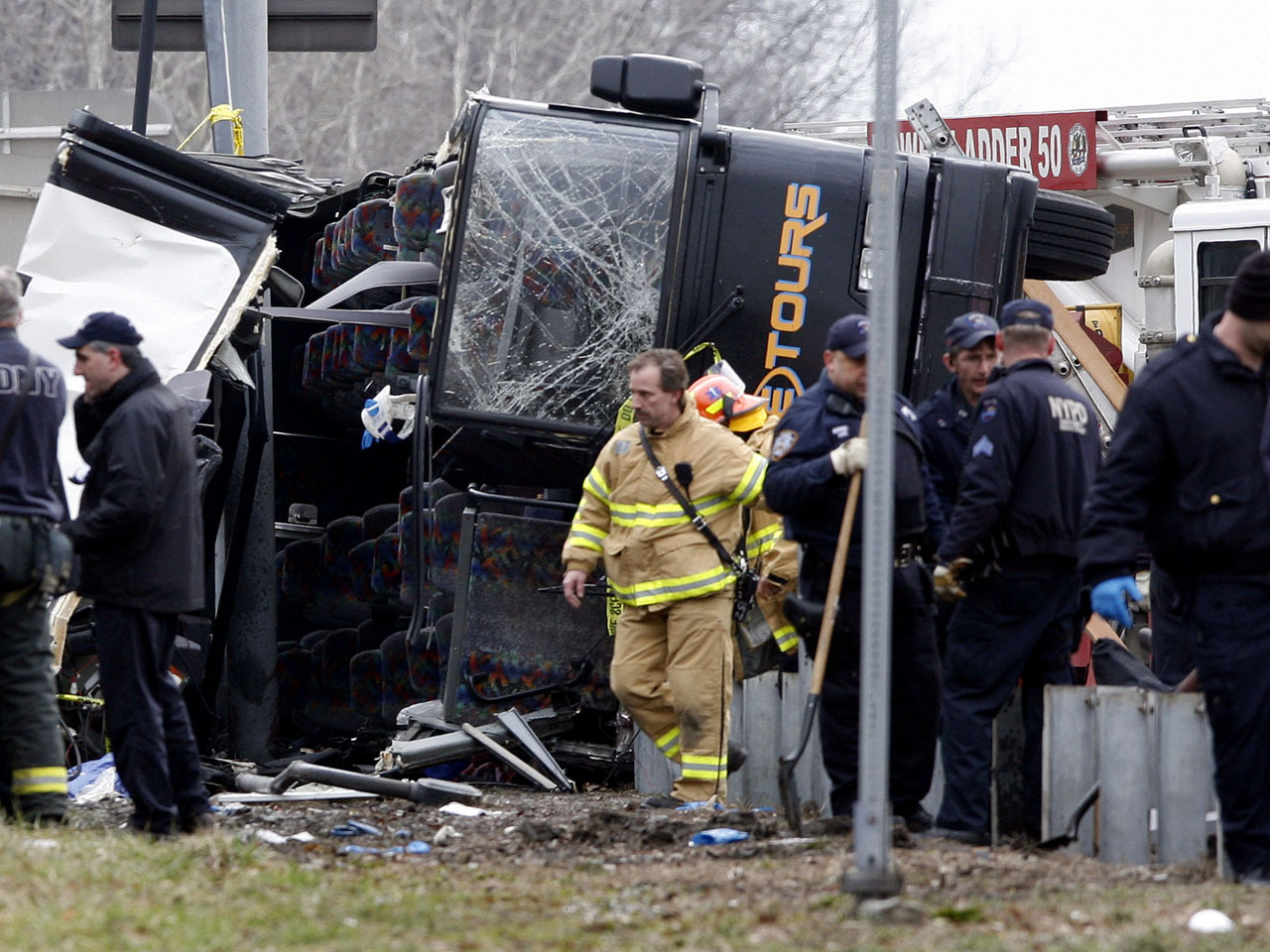 ALBANY, N.Y. - Investigators worked Tuesday to piece together the trail of a man with numerous traffic violations and a decades-old manslaughter conviction who crashed a tour bus over the weekend in New York City, killing 15 people.

The bus driver, Ophadell Williams, was ticketed in 1995 for speeding and twice for driving without a license, giving police the alias Erik Williams, two state officials familiar with the accident probe told The Associated Press on Monday. Williams' driving privileges were suspended, meaning he couldn't legally drive in the state, after he failed to address the charges.

The bus crash occurred Saturday as gamblers were returning to New York City's Chinatown neighborhood, in downtown Manhattan, after a few hours at the Mohegan Sun casino in Uncasville, Conn. The bus was sheared in half by a sign pole.

On Monday night, another company's luxury tour bus from Chinatown to Philadelphia crashed on the New Jersey Turnpike, killing the driver and a passenger. About 40 people were hospitalized.

National Transportation Safety Board investigators said they were looking at Williams' last 72 hours before the Saturday crash, checking the casino's surveillance video.

"We want to know what he ate, what he drank and how much he slept," NTSB vice chairman Christopher Hart said.

Investigators zeroed in on the 40-year-old Williams' record after his story that his tour bus was clipped by a tractor-trailer fell apart when passengers and witnesses said it never happened.

Investigators are trying to follow Williams' steps by matching Social Security numbers of traffic stops under different names, the officials said, speaking to the AP on condition of anonymity because of the sensitivity of the investigation. Williams also had an incomplete log book, which is required for commercial drivers, the officials said.

The revelations about Williams, who has a 20-year-old manslaughter conviction, prompted Gov. Andrew Cuomo to launch a state investigation into how Williams was able to hold a valid commercial driver's license at the time of Saturday's crash.

Telephone calls to Williams' Brooklyn home were unanswered Monday. A spokesman for the bus company that employed him, World Wide Travel, declined to comment, on the instructions of federal investigators.

Williams was convicted of crimes using two aliases. He served just more than two years for manslaughter for his role in a stabbing in 1990, state correction records show. He initially had been charged with second-degree murder.

Williams served about three years, from 1998 to the middle of 2002, for grand larceny for removing an $83,905 check from a Police Athletic League fund, correctional services spokeswoman Linda Foglia said.

He also was arrested by New York City police on June 4, 2003, for driving with a suspended license and for possession of three police radios. In 1987, he was arrested on charges of trying to get on public transportation without paying.

There are no federal regulations that would prohibit states from issuing a license to a bus driver with a criminal record, said Duane DeBruyne, a spokesman for the Federal Motor Carrier Safety Administration.

Hart identified the owner of the tractor-trailer as Webster Trucking Company of Connecticut and Massachusetts and said it was cooperating.

He said officials were bringing in extra equipment to inspect the left front side of the bus to check the driver's account.

State police have identified all but two of the victims. Officials said most were of Chinese descent.

Sai Ling, 57, lost her parents, Kam and Yuk Ng, in the crash. She said her father, a former cook, had gone to the casinos for many years, but her mother, a retired garment worker, had begun to accompany him in the last few months after her sister died.

"He didn't want to see her crying every day," Ling said.

Ling said her parents had lived in the U.S. for 30 years and left seven grandchildren.

"This bus driver took their lives," she said. "They were in good health. They expected to live another 10 years."

The casino has a lounge for bus drivers with coffee, soda, snacks and televisions, Mohegan Sun President Jeff Hartmann said. He said he did not know whether Williams was in the lounge before the trip.

"We don't keep track of them. They're on their own," he told the AP.

He said the casino was cooperating with police.

The bus was one of scores that travel daily between Chinatown and the casinos in southeastern Connecticut. The Mohegan Sun caters to Chinese-American gamblers and has estimated that one-fifth of its business comes from Asian spending. Hartmann said 44,000 buses visit the casino annually from around the region.

Williams, who was released from a hospital Sunday, was at home Monday but did not appear outside. His friend and neighbor Francisco Rivera said he was a safe driver.

"I think something else happened. ... I've been in a car with him several times and I've never seen him drive crazy ... or swerve," Rivera said.

He said there was a death in Williams' family this year and a younger brother was lost "to the streets."

"And now this happens to him," he said. "Everybody's just messed up in the family right now."