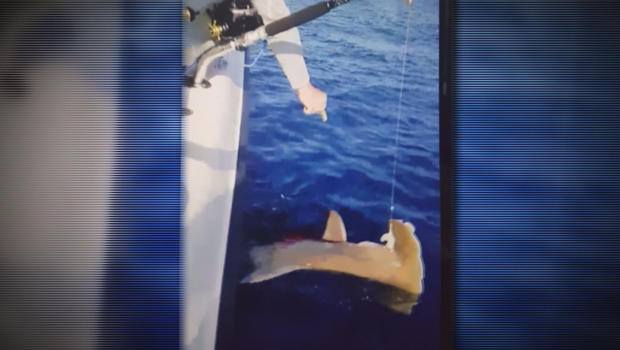 An investigation is underway in Florida after another reported case of shark abuse was caught on camera. A new video captures a fisherman shooting a hammerhead shark with a handgun.

A different video that surfaced last month showed a shark being dragged behind a speeding boat.

No charges have been filed in the shark abuse incidents, but animal activists claim they were carried out by the same group of men, reports correspondent Manuel Bojorquez. They also say they have other videos of their disturbing behavior out on the water, and may release them today.

In the latest video, a hammerhead shark is pulled out of the water and shot twice in the gills.

Kompothecras allegedly deleted a photo from his Instagram account posing with a dead hammerhead (left), and wearing clothes similar to the man in the shooting video.

"It's just wanton killing," said animal activist Russ Rector. He says he got the video from someone who filed a complaint with state investigators.

Rector says many of the same men were responsible for dragging a blacktip shark from their boat, while laughing. He insists they also poured beer into the gills of a hammerhead, and that more unsettling videos are coming.

"There's so much alcohol involved," Rector said. "You're gonna see the other people and Alex shooting at other fish on the line."

According to People magazine, who interviewed Kompothecras before the video was made public, Kompothecras deleted a video from his Instagram account showing a shark being shot.

"There are images of me and I feel horrible," he said. "I am embarrassed and it won't happen again."  He denied taking part in dragging the other shark.

In Florida, where it's illegal to kill marine life with guns or explosives, hammerheads are protected.  But in federal waters further out, shooting them is allowed. It's unclear where the shark was shot.

"I know a lot of people fear sharks, but really sharks have a lot more to fear from people," said Neil Hammerschlag, shark research and conservation program director at the University of Miami. "I think this whole situation is just an example of that."

Hammerschlag says some hammerhead species are threatened with extinction.

"It is clearly just a situation of mistreating wildlife," he said. "I don't think there's any place for that in society."

"CBS This Morning" reached out to Alex Kompothecras, but he did not respond.

MTV, which declined to comment on the shark shooting video, says some "Siesta Key" cast members have received threats.

A lawyer for some of the men in the dragging video says the shark was already dead when it was towed.