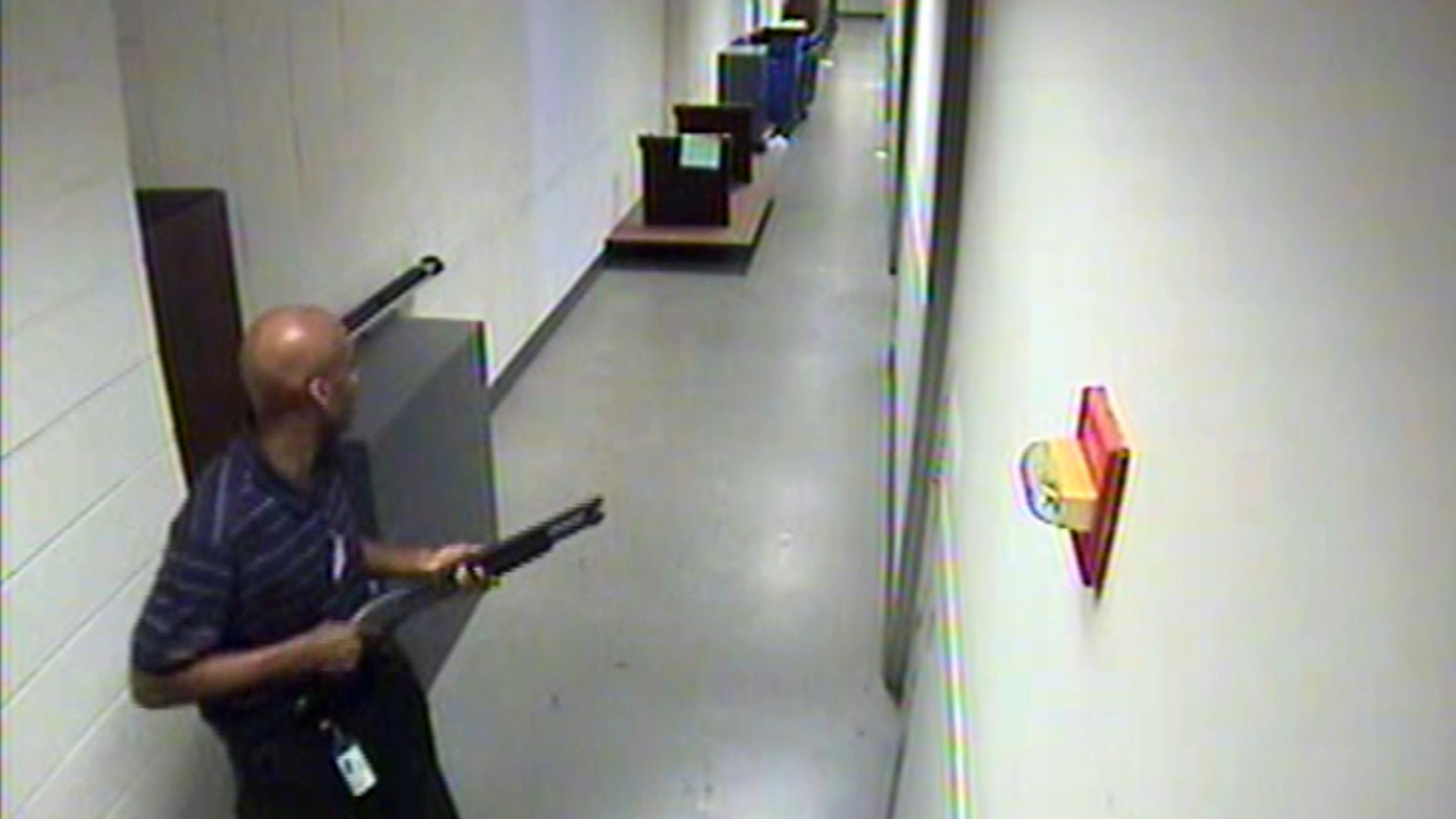 Editor's Note: For the full statement provided to 60 Minutes from the Office of Personnel Management, click here.

The following is a script from "Into Dangerous Hands" which aired on Nov. 8, 2015. Scott Pelley is the correspondent. Michael Rey, Oriana Zill de Granados and Andrew Bast, producers.

The fugitive Edward Snowden, convicted spy Chelsea Manning and mass murderer Aaron Alexis all had one thing in common, U.S. government security clearances which they turned into weapons. Clearances to handle classified information are granted after an investigation into the applicant's background. But you are about to see internal reports and interviews that reveal clearances granted after critical facts were overlooked. Some believe that Snowden and Manning were right to expose what they saw as government abuses like the NSA's domestic surveillance program, but few believe that all of America's secrets should be at risk to spies, criminals or the mentally ill. That has happened because of short cuts in a system that has placed American security into dangerous hands.

Aaron Alexis was profoundly psychotic when he hunted employees in a U.S. Navy office in 2013. He was armed with a shotgun and a clearance to handle military secrets.

Paul Stockton is a former assistant secretary of Defense who led an investigation into the massacre.

Scott Pelley: What was it about his security clearance that jumped out at you from the start?

Paul Stockton: Aaron Alexis never should have been granted a security clearance.

This is a draft, the public has never seen, of a separate federal investigation into the Alexis case. In his security clearance application, Alexis said he lived in Seattle but worked in Manhattan. No one asked about that. Alexis told the investigator that a felony arrest on his record was for letting air out of someone's tires. He didn't mention that he let the air out with a .45 caliber Glock handgun. That detail was in a Seattle police report that also said Alexis had a "blackout fueled by anger." But there's no record any investigator pursued that police report.

Paul Stockton: That kind of violent behavior, that problem of impulse control, that should be a prime signal this person is not, repeat, is not appropriate to have the trust associated with a security clearance.

Aaron Alexis' background investigation, like most, was done by a private company under contract with the federal Office of Personnel Management, known as the OPM.

Paul Stockton: After 9/11, the number of people that gained security clearances grew rapidly, in fact tripled since 9/11 and today.

Scott Pelley: Was OPM prepared for that?

Paul Stockton: There was an enormous backlog of security clearance investigations and Congress decided that getting rid of that backlog and increasing the pace with which investigations could be conducted was very, very important. It was a top priority.

The Office of Personnel Management declined to be interviewed. But we did speak with three women who worked with thousands of OPM reports.

Brenda Persons: We literally had stacks of files sitting on floors cause we had no more place to put them.

Brenda Persons, Kathy Treese and Linda Dei were three of the people at the Department of Defense who granted or denied clearances based on the investigations of the Office of Personnel Management. They were called "adjudicators" and they've recently retired.

Linda Dei: I consider OPM to be the JV of background investigations.

Scott Pelley: Not the varsity team?

Linda Dei: Not the varsity team.

They told us OPM's investigations often had major omissions. Some even skipped the required interview with the person applying for the clearance.

Scott Pelley: The Office of Personnel Management says, "Look, if there's a problem with the file, send it back. We'll work on it again."

Brenda Persons: We'd be sending the majority of them back.

Kathy Treese: Nobody would ever get a clearance.

Scott Pelley: The files were that defective?

Kathy Treese: Yeah, they were that defective.

Scott Pelley: Did you have any reason to doubt Manning's loyalty to the United States?

In 2009, Jhirleah Showman was Manning's supervisor in an intelligence unit headed to Iraq.

Jhirleah Showman: I pointed to the patch of our American flag that was on my shoulder. I said, "What does this flag mean to you?" He said, "It means absolutely nothing to me. I hold no allegiance to this country and the people in it."

Scott Pelley: How does he get a top-secret security clearance?

Jhirleah Showman: That is a good question.

Manning's security clearance investigation failed to check a complaint his stepmother made with Oklahoma City Police. If they had, they might have heard her 9-1-1 call.

[Stepmother: My husband's 18-year-old son is out of control and just threatened me with a knife.]

If investigators had checked his enlistment papers they might have seen that he wrote that he joined the military to, "sort out the turmoil and mess in my life." Before Manning's top-secret clearance was granted, he stabbed a soldier with a pencil and was ordered into counseling for fits of rage.

Jhirleah Showman: I went directly to my superior.

Scott Pelley: And told them what?

Jhirleah Showman: I said that he cannot be trusted with a security clearance. We can't deploy him and he's most likely a spy.

Jhirleah Showman told us her superiors said they couldn't afford to lose a man with a valuable top-secret clearance. In Iraq, she says she confronted Manning after he repeatedly violated the rules including sneaking a camera and recordable CDs into this high-security intelligence vault.

Jhirleah Showman: And he screamed, "No," at the top of his lungs and came and punched me right in the face and body slammed me at the same time. I put him in a hold and I asked him if this is what he wants. He said...he's tired of everybody watching his activities.

Scott Pelley: This guy has done multiple things at this point that a soldier could be court-marshaled for.

Scott Pelley: And his security clearance never gets pulled.

Over eight months, Manning used the CDs to record hundreds of thousands of secrets in that vault and delivered them to the website, Wikileaks.

Jhirleah Showman: I was sick but it didn't surprise me. 'Cause I knew it all along.

Manning was sentenced to 35 years in prison, where, she is now known as Chelsea Manning, a transgender woman.

In 2009, Linda Dei's office at the Pentagon relied on OPM investigations of soldiers like Manning to decide whether to grant security clearances. But Dei began to suspect problems with the FBI name check -- a search the FBI does of its criminal database at the request of OPM. Dei saw cases where clearances were granted before the results from the FBI were complete.

Linda Dei: I was alerted to a potential problem when all of a sudden an investigation that OPM had closed over a year before now included classified information from the FBI name check.

Scott Pelley: How important was that piece of information, that FBI report, in making an adjudication?

Linda Dei: I thought it was probably the most important lead in an investigation. I mean considering that an adjudicator is to try to determine whether subject is loyal to the United States. The kinds of crimes that the FBI investigates, sabotage, espionage, terrorism, that's what that lead told us.

Linda Dei wasn't the only one who was suspicious. The federal investigator looking into Aaron Alexis' case wrote in his report that the FBI name checks appeared "curious." So, as a test, he decided to examine, at random, top-secret security clearance investigations for translators who were working in Iraq and Afghanistan. He wrote, "we reviewed the investigative files of ten." The OPM's reports showed none of the subjects had FBI files when, in fact, there were FBI records on - quote -- "seven of the ten."

Scott Pelley: Are there people today who have clearances and should not have them?

John Hamre: Yes, there are. We have spies in our midst. I'm convinced of it.

John Hamre is a former deputy secretary of Defense who chairs the Defense Policy Board that advises the Pentagon.

John Hamre: Our system is very obsolete in my view.

Obsolete, Hamre says, because the foundation of each investigation is a questionnaire, called a "Standard Form 86" which the applicant fills out himself. Aaron Alexis got away with lying on the form about his gun-related arrest. And Manning lied about his mental health. Also, regulations don't allow investigators to search the applicant's social media because of privacy concerns.

John Hamre: It's amazing what people will say on their Facebook account that they don't say on a security clearance.

Edward Snowden, the National Security Agency contractor who pulled off the biggest theft of U.S. secrets ever, had a background investigation no better than Manning's or Aaron Alexis'.

John Hamre: And when we have failures, they're catastrophic. The failure with Snowden was catastrophic. So our big elaborate, expensive system didn't prevent something that was truly important.

We've obtained this internal memo that has not been public before. It's a warning to the head of the Office of Personnel Management from the man who investigates the agency, OPM's Inspector General Patrick McFarland. It was written in 2013. McFarland writes that Snowden's background investigation was "...deficient in a number of areas..." and "...OPM itself did not identify that the report had glaring deficiencies." McFarland concludes, "there may well be systemic problems."

"The failure with Snowden was catastrophic. So our big elaborate, expensive system didn't prevent something that was truly important."

We've learned that Snowden's behavior raised concerns when he worked at the CIA. And when he left the agency, the CIA put a red flag in his file in case Snowden applied for another job. He did, a civilian job for the NSA where he stole the secrets. Snowden had found a simple way to beat OPM's review of his security clearance.

Scott Pelley: In the section about his job history, he said that his previous job was classified and he didn't give any more details. OPM did not verify his previous employment as a result of that.

John Hamre: Obviously after the fact, it's a great-- it was a great mistake.

Scott Pelley: What would you say is the greatest insider threat that we face as a result of the way these security clearances are done?

John Hamre: Snowden was an example of it. He moved into an enormously sensitive position. We control people at the gate and once we give them a credential, they're in the compound, we don't pay attention to where they are after that.

Scott Pelley: We presume that if they're inside the fence--

John Hamre: We just presume. They're inside the fence. We don't organize our clearance process around the sensitivity of jobs. We organize them around people's background. And I think that's a big failing.

We know little about the other "glaring deficiencies" in Snowden's background investigation. Because the U.S. intends to prosecute if he ever leaves Russia, Snowden's files are secret, available only to those with a U.S. government security clearance.

This past summer, the Office of Personnel Management's computers were hacked in what investigators believe was a Chinese operation. Security clearance information on 21 million Americans was stolen. Including the kind of information that could be used to blackmail people with top-secret clearances. The head of OPM resigned in July.

Who betrayed Anne Frank and her family?
Scott Pelley