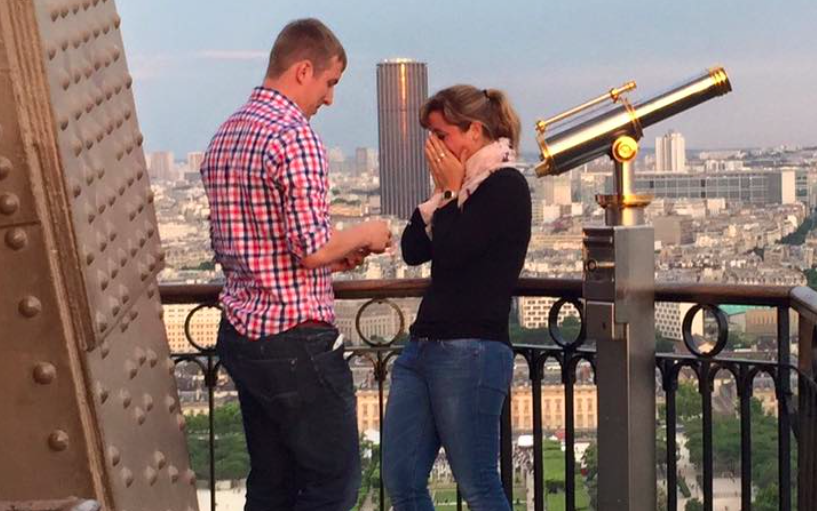 Two weeks ago, a California woman took a photo of couple's beautiful engagement at the Eiffel Tower during sunset.

The only problem: she has no idea who they are or where to find them.

But with a little help from 200,000 Facebook users, the search may soon come to an end.

Jennifer Bohn was on vacation in Paris, France, with her husband, Jeff, when she stumbled upon the "perfect" moment. As she was heading back in line to go to the top of the tower, she saw a man propose to his girlfriend.

"I turned the corner and it was the first thing I saw," Bohn told CBS News. "I just watched him get down on one knee -- any time you see that you're like 'wait a second.'"

So she did what any U.S. tourist would do, she whipped out her smartphone and took pictures.

"If that was me, I'd really want pictures of this moment," Bohn said, adding it was the first time she's ever witnessed a stranger's proposal. "It was gorgeous."

Bohn was about to approach the couple to share the photos when she heard her husband calling. Afraid she was going to miss the last elevator up to the top before sunset, she ran back in line, vowing to find the couple afterward. But she never did.

A few days later, the Clovis resident returned home and decided to share the photos on Facebook. Maybe someone will recognize them, she thought.

The post was shared by more than 200,000 people, including actress Candace Cameron-Bure, better known as D.J. Tanner on "Full House."

Thanks to Cameron's post, Bohn says she thinks she may have found the man in the picture. She's just waiting for confirmation.

Bohn just wants the couple to remember that moment forever.

"With pictures, you can go back on any moment," she said. "It brings back all of the feelings, emotions -- a moment like that? I would want to capture."