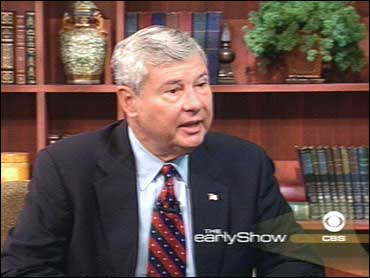 Sen. Bob Graham, a Democrat from Florida, is serving his third and final term. He spent 10 years on the Senate Select Committee on Intelligence, and co-chaired a joint House-Senate inquiry into the failures of U.S. intelligence prior to the Sept. 11 attacks. Now, he has a new book on the subject called "Intelligence Matters."

Along with some other Democratic leaders, Graham was critical of Sen. John Kerry's campaign, saying, "The people are there. The candidate is there. The reason to vote is a little bit out of focus." Now the Democratic presidential candidate has come out with a bit more aggressive message saying the "W" in George W. Bush stands for "wrong," and being critical of Iraq, something Graham says is putting Kerry on the right track.

"I would personally hope he would give some greater emphasis to the sorts of things in this book, which are the series of missteps of policy, and disclosure to the American people of the failed war on terror," Graham tells The Early Show co-anchor Hannah Storm.

During a campaign stop in Pennsylvania, Kerry told voters he would try to pull U.S. troops out of Iraq during his first term and would like to start in the next six months, putting the timetible for withdrawal around June.

"If it is realistic, it's going to require two things," Graham says, "One, a very serious and concerted commitment to developing a security force of Iraqis. And, second, bringing in some international allies who not only have some military and law enforcement capabilities, but some money that can help us pay for this occupation."

The Senate is reconvening this week after a break and at the top of the agenda are the 9/11 Commission recommendations. Graham's book is all about fixing the intelligence problems in the U.S. Asked if the 9/11 recommendations go far enough in rectifying those problems, he says, "I think they are basically on the right track, and I will support the recommendations with a few modest changes.

"One area that I think is very important is the human aspect of intelligence. We have a human intelligence core, which grew up in the Cold War. They know how to speak Russian. They understand Russian; they frankly don't know very much about the Middle East and Central Asia, from which our principal threats now coming. So we got a big job to bring in a new generation of human intelligence while we're giving some transitional assistance to the old core so we can do a better job than we did in Afghanistan and Iraq."

That means not only having more manpower in terms of intelligence with the right skills – people who can speak Arabic and understand the culture of places like Iran and Pakistan, he says.

The president's proposed nomination of Rep. Porter Goss as the next CIA director is something Graham supports.

"I have known him for a long time in many different capacities. He's an unusually intelligent, focused, dedicated patriotic American, and I think he would be an excellent director of central intelligence," Graham says, stressing Goss would be the right person to make the right changes.

He says, "I think that we do need to have an intelligence czar, not to centralize, but to intelligently decentralize so that we can have, for instance, an intelligence unit that is focused on counter-proliferation of weapons of mass destruction on terrorism, on specific areas such as North Korea and Iran."

One of the strong allegations Graham makes in "Intelligence Matters" is that there is a support network for al Qaeda backed by Saudi money, which still is in the United States. He accuses the White House of covering up the Saudi relationship with the 9/11 terrorists.

He explains, "The book talks about a compelling situation in San Diego, Calif., where there were terrorists who were receiving a variety of support from Saudi agents. Then the question was raised: Why would those two have been selected out of the 19 to get this special attention?

"My answer was that they weren't, that there was a similar pattern support to other terrorists and that, in all likelihood, that support system, that infrastructure for terrorism, is still in place inside the United States, and the fact that we're now on, yet another high alert is illustrative of that."