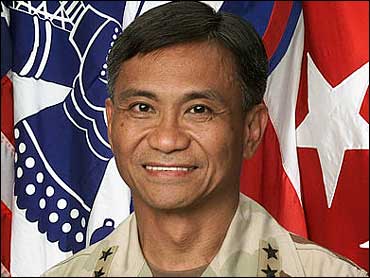 The Army general who probed abuse at Abu Ghraib prison, and placed at least some blame on a policy that had prison guards helping to "set the conditions" for prisoner interrogations, was testifying to Congress on Tuesday.

Maj. Gen. Antonio M. Taguba, author of the Pentagon report that found numerous "sadistic, blatant and wanton criminal abuses" at the U.S.-run prison complex near Baghdad, appears before the Senate Armed Services Committee as question mount over what role intelligence officers played in the abuse.

Stephen Cambone, the undersecretary of defense for intelligence, was among those scheduled to testify later in the day as the committee delved into "chain of command" issues in the prison abuse cases.

The hearing was set up Monday, to follow last Friday's, as the Pentagon agreed to disclose as-yet unreleased photos and at least one video to the. The administration would not say whether it would allow the public to see them.

In his report, Taguba found that military and CIA interrogators "actively requested that (military police) guards set physical and mental conditions for favorable interrogation of witnesses."

Taguba found that the guards "were directed to change facility procedures to 'set the conditions' for (military intelligence) interrogations."

In Geneva, the International Committee of the Red Cross said U.S.-led coalition intelligence officers had told it that up to 90 percent of Iraqi detainees were arrested by mistake.

U.S. military and civilian officials say they first became aware of serious accusations of prisoner abuse back in January, when they started an investigation. But the Red Cross is telling a much different story, saying its investigators raised the alarm months earlier, reports CBS News Correspondent Mark Philips.

Based on its inspections at various coalition holding areas and prisons in Iraq between March and November of last year, the Red Cross says it found not isolated incidents but a "consistent pattern … of brutal behavior."

"We are talking about the places of detention all over Iraq, in the south, in the center of Iraq, all places we visited had similar pattern of behavior and treatment — which is not acceptable," said Roland Huguenin-Benjamin, with the agency's International Committee.

Attorneys for an Army reservist who was photographed smiling and pointing at naked, bound Iraqi prisoners said she had been ordered to pose because her presence would be especially humiliating to the men.

Pfc. Lynndie R. England, 21, faces military charges including conspiracy to maltreat prisoners and assault consummated by battery, and could face punishments ranging from a reprimand to more than 15 years in prison.

Six other soldiers from the 372nd Military Police Company are also charged. One, Spc. Jeremy C. Sivits of Hyndman, Pa., will face a court-martial in Baghdad next week.

The photos were staged by intelligence agents to intimidate other prisoners, and appearing naked in front of a young woman would be especially humiliating to Iraqi men, attorney Rose Mary Zapor said Monday.

"The (soldiers) pictured were congratulated. They were told the photographs were successful in gathering information," Zapor said.

Another of England's Denver-based attorneys, Giorgio Ra'shadd, said his client was being offered up as a scapegoat for the mistreatment of Iraqi prisoners.

"What is offensive to me is that we have generals and the secretary of defense hiding behind a 20-year-old farm girl from West Virginia who lives in a trailer park," Ra'shadd said.

In photographs that have been shown worldwide, England is seen smiling, cigarette in her mouth, as she leans forward and points at the genitals of a naked, hooded Iraqi. Another photo shows her holding a leash that encircles the neck of a naked Iraqi man lying on his side, his face contorted.

The lawyer for Charles Graner, the military policeman seen in many of the pictures, says the man bending over the naked and manacled Iraqis is a civilian contractor working for military intelligence and the two men with their backs to the camera are soldiers with military intelligence.

Americans can expect more shocking photos. Senators and the Pentagon were working late Monday to determine when and under what circumstances lawmakers would view the additional material.

President Bush visited the Pentagon Monday, saw some of the photos and issued a strong endorsement of embattled Secretary of Defense Donald H. Rumsfeld. "You are doing a superb job," Mr. Bush said.

"The president's reaction was one of deep disgust and disbelief," he said.

Armed Services Committee chairman Sen. John Warner, R-Va., has said he wants declassification of as much of the material as possible so that it can be shown to the American public.

"Sooner or later they're going to have to be released," said Senate Intelligence Committee chairman Pat Roberts, R-Kan. He predicted they would come out piecemeal if the administration does not release them on its own.

Monday evening, the U.S. Senate unanimously approved a resolution condemning the abuse of Iraqi prisoners at the Abu Ghraib prison. The 92-0 vote calls for a "full and complete investigation to ensure justice is served" and urges that anyone responsible be held accountable. It also apologizes to the prisoners and their families. The non-binding resolution also stresses that the vast majority of Americans in Iraq are serving "courageously and with great honor."

The abuse scandal is spreading across the Atlantic, with the human rights organization Amnesty international claiming British troops have killed at least 37 civilians, and that the military failed to investigate all the shootings, reports CBS News Correspondent Steve Holt. The ministry of defense says it is studying Amnesty's report.