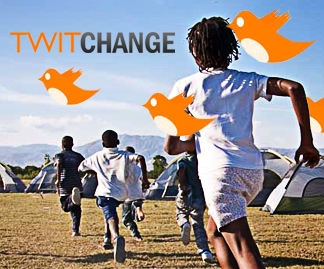 LOS ANGELES (CBS) Shaun King is sometimes referred to as the Facebook Pastor.

While day-to-day, the young pastor is busy overseeing The Courageous Church that he launched in 2009, his social media status was elevated when he began a social good campaign called TwitChange.

Little did he know that the initiative, would have him rubbing shoulders and tweets wit Eva Longoria and raising over $500,000 for Haiti.

Who was involved in the first TwitChange? How much did you raise and where did it go to?

TwitChange was founded in 2010 in the aftermath of the devastating earthquake in Haiti. After most of the media attention disappeared, the TwitChange team conceived this idea as a way to refocus awareness to the needs of Haiti and raise funds for a school being built there. Over 150 celebrities ranging from Justin Bieber to Tony Robbins were involved, and Eva Longoria served as our spokesperson. She had been extremely supportive of our efforts to provide aid in Haiti and was ultra involved with our first campaign. We raised over $500,000 that was used to begin construction on a home and school for severely disabled orphans in Haiti.

I started aHomeInHaiti.org in the weeks immediately following the earthquake to provide emergency shelter to Haitians. In 2010, through the power of social media, we rallied the world to send nearly $2 million in tents to Haiti. When it was all said and done we were shocked at how much we accomplished. We were the largest independent buyer of tents in the world in 2010 and sent more tents to Haiti than all but 2 countries in the entire world. All of this happened because we created an easy, social media savvy way for people to be the solution!

What exactly did celebrities do who were involved?

Celebrities that are involved do a few things before the campaign and 5 primary things once the auction is over. We ask every celebrity to tweet a few times about the campaign to help build buzz and momentum for what we're doing before the auction ever begins and again during the auction. This is one of the big reasons our site has had nearly 50 million hits in 5 months.

How did the internet and social media help you spread the word and raise money?

Everything about TwitChange relies on the internet and social media. At our core our goal is to bring celebrities and fans together on Twitter to bring awareness and raise funds for compelling causes. Since we launched in September our campaigns have received over 45 million hits and several million tweets. In our auctions, fans do not bid on classic items like autographs, but they bid on what we think is kind of like a modern day autograph - a tweet from their favorite celebrity - and all of the proceeds go to charity.

Our latest initiative was created to provide emergency aid to American veterans (active or retired) and their families. Troy Polamalu, two-time Super Bowl winner with the Pittsburgh Steelers, presented this cause to us several times. He and I both have members of the military in our family and we decided to go for it! Over 200 celebrities are on board @ TwitChange.com and our charity auction will run from January 29th-February 5th.

How can people get involved?

People can get involved in many ways - including by donating directly to the great charities that we feature. In a viral sense, we exist when fans tweet and ask their favorite celebrities to get involved. The more people tweet about what we do @ TwitChange.com - the better!

Where do you see this developing in the future?

We already have several awesome campaigns planned for 2011 and we will continue to find creative ways to bring world influencers and their supporters together on Twitter to change the world. In March we will have our largest campaign ever with the organization CARE to promote International Women's Day. It's going to be HUGE!

What's a motto or quote you live by?

I live in Atlanta and graduated from the alma mater of Dr. Martin Luther King, Morehouse College, and think of his quotes often. One of my favorite from him is "Injustice anywhere is a threat to justice everywhere." and I think about this quote often as our team works hard to help people all over the world.

Inspired Nation is a weekly series profiling people changing the world and inspiring all of us to do the same.