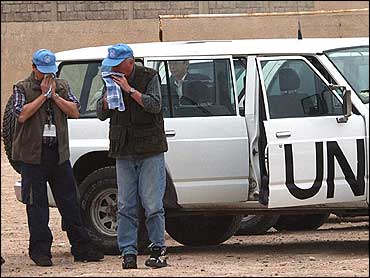 While diplomatic maneuvering continues over Turkish bases and a new United Nations resolution, inside Iraq, U.N. arms inspectors are privately complaining about the quality of U.S. intelligence and accusing the United States of sending them on wild-goose chases.

CBS News Correspondent Mark Phillips reports the U.N. has been taking a precise inventory of Iraq's al-Samoud 2 missile arsenal, determining how many there are and where they are.

Discovering that the al-Samoud 2 has been flying too far in tests has been one of the inspectors' major successes. But the missile has only been exceeding its 93-mile limit by about 15 miles and that, the Iraqis say, is because it isn't yet loaded down with its guidance system. The al-Samoud 2 is not the 800-mile-plus range missile that Secretary of State Colin Powell insists Iraq is developing.

In fact, the U.S. claim that Iraq is developing missiles that could hit its neighbors – or U.S. troops in the region, or even Israel – is just one of the claims coming from Washington that inspectors here are finding increasingly unbelievable. The inspectors have become so frustrated trying to chase down unspecific or ambiguous U.S. leads that they've begun to express that anger privately in no uncertain terms.

U.N. sources have told CBS News that American tips have lead to one dead end after another.