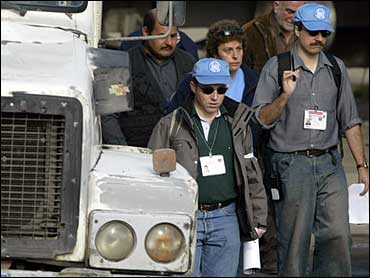 Iraq stuck by its stand Sunday that it has eliminated banned weapons programs only days ahead of a U.N. Security Council session in which the United States has pledged to provide proof of Saddam Hussein's arsenal.

Secretary of State Colin Powell is to present the U.S. case to the council Wednesday. However, an Iraqi lawmaker said Sunday that no one could have any proof of banned Iraqi weapons because it has none.

"Colin Powell is going to present to the Security Council what he called new evidence against Iraq," National Assembly member Mohammed Adhami said. "Why doesn't he give it to the inspection teams? We even asked them to send people from the CIA to check for weapons."

A series of U.N. resolutions since Iraq's defeat by a U.S.-led coalition in the 1991 Gulf War prohibit any programs for weapons of mass destruction in Iraq. Thousands of such Iraqi weapons were destroyed under a previous U.N. inspection program in the 1990s.

Despite Iraq's denials, and without presenting proof, the United States and Britain insist Saddam's regime is hiding banned weaponry and say they will disarm Iraq by force if necessary.

The United States has marshaled nearly 90,000 military personnel in the Gulf region, and the number may soon double.

Amid the buildup, the two chief U.N. weapons inspectors planned to return to Baghdad on Saturday for talks before their next report to the council on the status of weapons inspections, Iraqi and U.N. officials said.

In a television interview Sunday, the Iraqi officer in charge of working with weapons inspectors gave no indication Iraq is ready to make such concessions.

Maj. Gen. Hossam Mohammed Amin told the British Broadcasting Corp. that the scientists were reluctant to speak in private with the inspectors about weapons programs.

"We can't force the scientists to make such interviews and if any of them want to make the private interview, OK, we are encouraging them in that," Amin told the BBC's "Breakfast with Frost" program from Iraq.

So far, no Iraqi scientist has agreed to interviews without the presence of Iraqi official. The United States maintains Iraq has threatened scientists with death if they agree.

The inspectors believe the specialists will be more candid in private meetings.

The chief inspectors' next report to the council, on Feb. 14, could influence the debate over whether time for Iraq to comply with U.N. demands has run out. The United States maintains it is Iraq's responsibility to prove it has no banned weapons.

ElBaradei, head of the Vienna-based International Atomic Energy Agency, indicated Friday that inspectors might have to meet with the "highest levels" of the Iraqi regime to break the impasse - presumably Saddam himself.

But Deputy Prime Minister Tariq Aziz indicated Saturday that no meeting with the Iraqi leader was in the works.

Blix's mission "could be dealt with the experts, who will talk to him about technical matters," Aziz told reporters. "And when he was on his last visit, he met the vice president and the foreign minister, and in my opinion that is enough."

The disagreement over surveillance flights involves a U.N. plan to use American U-2 spy planes to fly over Iraq in support of inspections.

The Iraqis say they would allow such flights as long as the United States and Britain halted air patrols over southern and northern Iraq while the spy planes were in the air. This way, they say, Iraqi anti-aircraft batteries would not mistake the reconnaissance aircraft for U.S. and British warplanes and fire on them.

Coalition aircraft, meanwhile, dropped 420,000 leaflets over southern Iraq, warning people that aircraft can strike at any time and encouraging them to avoid areas occupied by Iraqi troops, the U.S. Central Command said.

Also Sunday, U.N. monitors made surprise visits to a missile factory west of Baghdad and a chemicals complex to the south, both often inspected before, and to the Abu Ghraib Dairy Company, 12 miles west of the capital, the Information Ministry reported.

The dairy inspection was not immediately explained, but presumably was of interest to the teams searching for signs of biological weapons work.

The Turkish military began moving troops Sunday to the border with Iraq, strengthening forces along its rugged southeastern frontier for a possible U.S.-led war with Iraq.

Turkey had said it was likely to move troops into northern Iraq to block a potential influx of refugees, but some observers says the real aim of the mission would be to prevent the creation of a Kurdish state in northern Iraq in the aftermath of war.

And, major Iraqi newspapers reported the space shuttle Columbia tragedy on their front pages on Sunday.

Although no official Iraqi government statement was issued, individual Baghdad officials expressed sympathy for the American people, despite the tense confrontation between the two countries.

"We are people who love other people," said Bushra al-Samarai, a member of the Iraqi National Assembly. "We respect their feelings and share their sadness over this tragic incident."

A National Assembly leader, Secretary General Ghalib Jassim, also voiced sympathy for the space shuttle tragedy, but with a reminder that Iraq feels under siege from the same stricken America.

The news of the loss of the Columbia on Saturday appeared almost immediately over Iraq's Al-Shabab (Youth) television, a station owned by Saddam's son Odai. It switched to live coverage of the fast-developing news carried by the Qatar-based satellite news channel Al-Jazeera.

In the Babil newspaper - also owned by Odai - the story was carried at the bottom of page one Sunday with an old color photo of a U.S. space shuttle. It continued inside for almost a half-page, based on foreign news agency reports.

"Columbia Shuttle Crashed and the Crew Was Killed," read the headline low on the front page of Al-Thawra, newspaper of Iraq's ruling Baath Party.

That article noted that one of the astronauts was a "Zionist" who had flown in the Israeli bombing attack in 1981 on Iraq's Tammouz reactor, which was believed to be key to an Iraqi nuclear bomb program.

Some coverage was decidedly low-key. The newspaper Al-Iraq carried just a two-paragraph, second-page brief about Columbia. In every paper, Saddam dominated news with his defiance of U.S. threats. A headline in Al-Thawra read: "The Warrior Leader Said I am Confident that Victory is Assured."