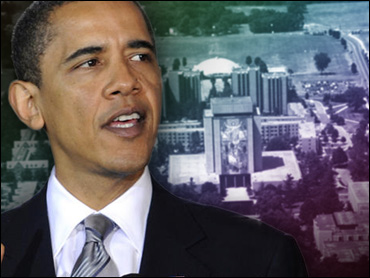 President Barack Obama's planned commencement address at Notre Dame has prompted outrage from students and activists upset that the Catholic university has invited a pro-choice politician to its campus. The controversy has generated headlines and with them consistent debate in the media about whether or not the president should show up at all.

But the situation is less controversial than it may seem from all the chatter over the past few weeks. Indeed, it seems that the most vocal opponents of the president's visit only represent a small minority of the college community.

"Most people that I speak to are either happy and excited or indifferent," said Tara Pillai, a 21-year-old junior from Kentucky. "I don't know very many students who are super upset. Maybe they didn't vote for him, but they're flattered to have him speak here."

On a national level, a new survey finds a markedly similar response: A majority of Catholics, some 60 percent, say that Notre Dame should not rescind its invitation to Mr. Obama, according to a Quinnipiac University national poll released Thursday. Thirty-four percent of those surveyed thought the university should go back on its decision.

Before you take that as evidence that a sizable minority of Catholics are upset with the president, however, consider this: The numbers are nearly identical among the general population. Fifty-six percent of U.S. voters say the invitation should stand while 31 percent believe that it should be pulled. The similarity would suggest the opposition to the president's address is grounded more in ideology than religion.

While conservative groups and abortion rights opponents have gobbled up the lion's share of attention around the invitation, the announcement that the president would speak at graduation has been well received by the majority of students. In a special commencement issue,The Observer, Notre Dame's student newspaper, noted that of the 345 letters it received on the issue authored by students, 74 percent were in favor of the invitation.

The student groups who do plan to demonstrate against the university's decision are pledging to be decorous in their protests. The most dramatic actions are mostly consigned to outside agitators such as Alan Keyes, the conservative political activist, and Randall Terry, the author and anti-abortion activist.

"On the top of our priority list is respect for the seniors and respect for university in everything that we're planning," said Mary K. Daly, a 21-year-old junior from Kentucky and a spokesperson for ND Response, a coalition of 12 anti-abortion campus groups. "We are being careful not to detract from the seniors while remaining true to the Catholic pro-life mission of this university."

At the root of the protests is Mr. Obama's support for abortion rights and, to a lesser extent, embryonic stem cell research. The strongest objections are being voiced by the most partisan members of the Catholic community; other Catholics, both on campus and throughout the country, are less doctrinaire in their positions on those issues than the coverage of the controversy might have led one to think. Many students who were enthusiastic about the president's visit to campus said that while they disagreed with the president's views on abortion, they felt that his policies, particularly those relating to social justice and poverty, were reflective of their faith's emphasis on humanitarianism.

"There are a great number of people here who as Catholics and as people raised as Catholics have come to a more complex understanding of our heritage," said Kelly Wilkinson, a 24-year-old senior from Texas. "It's not that we think abortion has to happen more often. We just do not see [Mr. Obama] coming here as an endorsement of more abortions."

Catholic leaders have been divided over the proper response to Mr. Obama's speech. Most voiced opposition to the president's position on abortion, but others lauded him for voicing support for finding ways to reduce the number of abortions that take place each year. On CBSNews.com's "Washington Unplugged" this week, James Salt, communications director of Catholics United, and Bill Donohue, president of the Catholic League, clashed over the Obama invitation. Both men believed that Mr. Obama should be allowed to speak, but Donohue, whose group has opposed to Notre Dame's decision, felt that the university should have refrained from bestowing an honorary degree on somebody who differed with the church on abortion.

"I don't think it's possible to find somebody who's a greater champion of abortion rights," said Donohue. "He's diametrically opposed to the Catholic Church's teachings on an issue which we consider to be intrinsically evil."

Salt agreed with Donohue's opposition to abortion, but said that such a stance ignored the work the president was doing to try to end the wars in Iraq and Afghanistan and reduce poverty.

"We believe that the attacks on Notre Dame are really being orchestrated by those who'd like to make cheap political points rather than address the serious moral challenges facing our country today," he said. (You can watch the full debate here.)

Salt and Donahue were both relatively restrained compared with the anger expressed by Randall Terry, who has been in Indiana since April with a group he organized called Stop Obama Notre Dame. He says that he is committed to turning the graduation into a "circus."

Never one for understatement, Terry says that he believes that the university's decision to invite the new president is a crime and that conferring an honorary degree on Mr. Obama is a sin. To show his displeasure, he and other protestors have been picketing university entrances while holding graphic images of aborted fetuses. Both Terry and Keyes have been arrested; they say that they hope they will be able to not just disrupt the ceremony, but to get Notre Dame to cancel the speech.

Though they are bound to attract media coverage, it's important to note that Terry's protests are completely divorced from the ones being organized by campus groups. By Terry's own admission, that's not for lack of trying.

"The students are anemic," he said. "I've reached out to them repeatedly, when they told me they didn't have any problem with President Obama coming, I said 'they must be joking.'"

Consequently, Terry says his group has no qualms about shifting the focus from the day's graduates. That doesn't sit well with many students.

"I feel like its selfish on their part," said Jonathan Boyle, a 21-year-old senior from Texas. "I guess his aim is to try to ruin the graduation to make a point. I'm pro-life, but I think the money could be better spent by giving it to a local women's shelter than by using it for a publicity stunt."