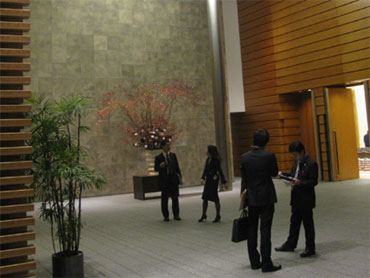 (CBS/Robert Hendin)
The traveling press of the White House press corps is pretty used to our White House, the big white building at 1600 Pennsylvania Avenue in Washington, DC. It's an old building, full of quirks, chipped paint and history. What used to be a swimming pool, used by past presidents, is now a tile-lined pit full of electronics and miles of cables for television. Above it is the White House briefing room.

So it was a rare treat yesterday for the press to see the Japanese White House. It's not called that of course, it's called the Kantei and it is a complex that hosts the prime minister's residence and an official office building. The U.S. White House itself holds the residence of the First Family, the press operations, and of course, the Oval Office itself. Other offices of the so-called Executive Office of the President are housed in various buildings around the residence.

The office building at the Kantei is an ultra-modern fete of architecture. A beautiful glass building that looks like a miniature Kennedy Center, instead of the stately, federal style White House that we know. 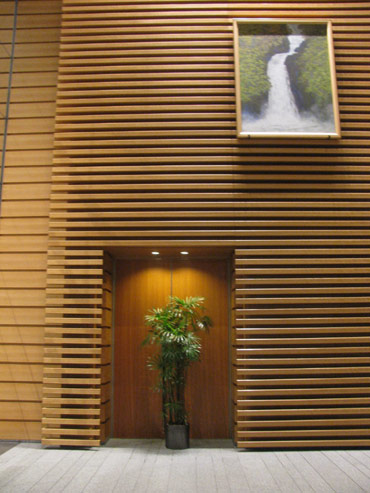 (CBS/Robert Hendin)
Walking into a dark slate tiled atrium, and up a large set of wooden stairs, the press corps entered a formal room for a photo-op between President Obama and Prime Minister Hatoyama. From there, down a long descending escalator, longer than it was tall, it was more of a slanted moving sidewalk than a set of moving stairs and down another long set of open wooded stairs.

The ground floors holds additional meeting rooms, as well as a full press conference room, about the size of the American East Room, home to the president's press conferences and many open events, but with the feel of a brand new hotel ballroom.

What makes the room special is a glass wall looking out into a full atrium, with what appeared to be a retractable roof three floors above. The rain was falling down to floor, more slate, with trees and glass walls throughout. The yellowed light from floors above permeates into the atrium.

The hall was filled with beautiful sculptures and art, not to be outdone by the American White House's collection of classic American portraits of presidents and nature scenes from the past.

Regardless of the age-old alliance between these two countries, the differences in the Japanese and the American White Houses couldn't be more stark.