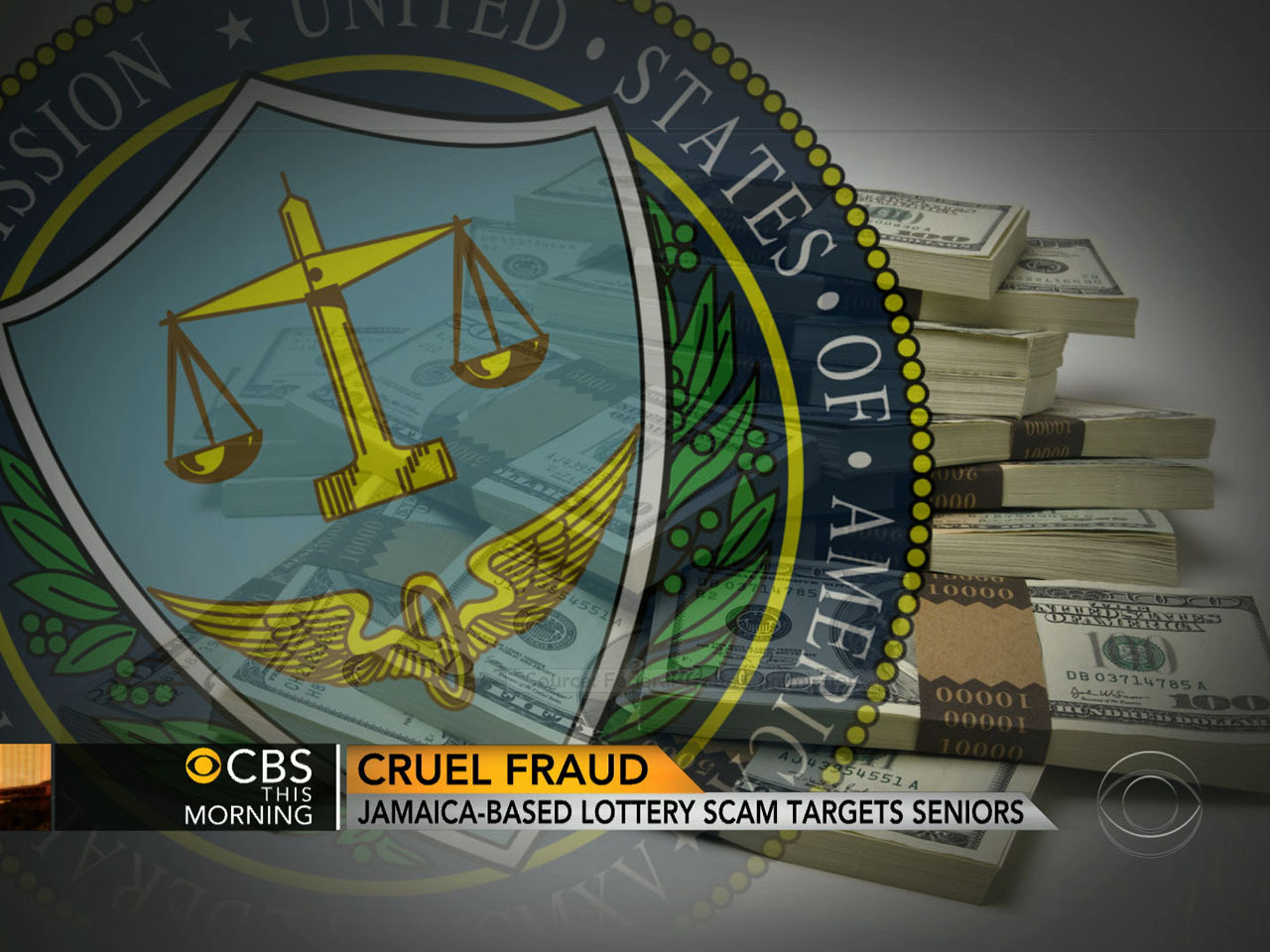 (CBS News) It's one of the biggest scams targeting seniors in the U.S. right now. Federal officials say "Jamaican lottery scams" are growing at an alarming rate, bilking the most vulnerable members of our population out of hundreds of millions of dollars a year.

It works when scammers in Jamaica obtain lists of older Americans' names and numbers. They then call the seniors, usually pretending to be with an American sweepstakes company, telling them they've won money. To get the prize, the person just has to pay a fee, which they are told is for processing, or taxes.

On the day CBS News visited Gomez at the Miami office, they intercepted a package, bound for Jamaica, with $9,000 dollars in cash inside.

Victims are falling for it because scammers seem to know exactly what to say -- and, it works. Complaints from across the country to the Federal Trade Commission about the scam jumped from 1,867 in 2007 to almost 29,220 in 2012 (but federal officials say far more are never even reported).

In Maryland, CBS News met a 79-year-old who identified herself as "Dorothy." Last year, she had a husband about to undergo triple-bypass surgery, a daughter with cancer, and a great-grandson born three months premature. She was trying to help them pay medical bills. That's when she received a call.

"Eight point somethin' million dollars, plus I don't know how much in cash," she recalled.

Asked what made her believe them, she said, "Maybe I wanted down deep to prove to my family that I could do something for them. I could help them. And he just sounded so convincing. So real."

Doug Shadel, with the AARP, says the scam often starts with charm, but can turn violent. "They're relentless," he said. "They will call 50 times a day, 300 times a week, until you give in. And the thing that's most worrisome to me, is these are the most vulnerable people we have. They're 75- to 80-year-old seniors who are scared to death by these guys."

We wanted to meet a scammer to see why they do this.

We found two women from Maine were scammed by same man. CBS News found his Facebook page and traced him to Montego Bay, a beautiful tourist destination, but also, it turns out, the center of this ugly scheme.

A special agent with U.S. Homeland Security, whose face CBS News was asked to conceal for his protection, gave us a tour with a Jamaican police escort. The U.S. has partnered with the Jamaican government to investigate these crimes.

First, we got a look at how some con-men are using the stolen money. In the middle of a modest neighborhood, we found a mansion. The agent told CBS News, "This gentleman was definitely involved in scamming U.S. victims and used the proceeds to build this mansion." He's been arrested.

The agent also took the CBS News crew to Granville, what he called "a dangerous area with a lot of gang activity."

Granville is believed to be the birthplace of the lottery scam.

While visiting there, it didn't take long to find suspicious activity. Jamaican police pulled over a vehicle and drew their guns, before questioning two men who they believe may be a part of an ongoing scam.

The next day, on our own, CBS News set out to meet the scammer whose Facebook page we'd seen. He agreed to see our producer, who he thought was bringing him money. What he didn't know is that hidden cameras were rolling. He said during that meeting, "What I did wasn't right. It's taking from people who's in need like I am. For example, I'm in a situation where I'm in a deep hole. May be they're in the same situation, but they can get a hold of cash which they can borrow it. That's the truth."

He seemed to be excusing his actions by saying Americans have money. But he claimed he was no longer involved. That's when the CBS News crew walked up. CBS News' Jeff Glor said, "I'm Jeff Glor from CBS News. I wonder if we could ask you a couple questions."

The man replied, "About what?"

Glor said, "About the lottery scam."

Asked how long he was part of it, the man said, "About a week. Man, I don't want to be on television."

Glor, pursuing him, said, "We just want to get a couple answers. That's all."

With that, he ran away.

But will scammers like him be stopped? The head of Jamaica's Major Organized Crime and Anti-Corruption Task Force, Carl Williams, told CBS News, they are trying. He said, "I'm not going to tell you that we will get rid of every single one, but we will bring this problem under control."

By the end of this month, new legislation should be on the books in Jamaica making the crimes easier to prosecute. Also, a congressional hearing in Washington, D.C. is set for Wednesday.

In the meantime, investigators recommend people talk to grandparents and parents about the importance of avoiding the scam. Never wire money to anyone you don't know. Hang up when they call.

Dorothy, now drained, both financially and emotionally, told us, "I don't want nobody else hurt. He had guts enough to steal money from me. And I was foolish enough to do it. ... I pray that someday God will forgive me."

For Jeff Glor's full "CTM" report, watch the video in the player above.

How meditation is making a "huge difference" in one Baltimore school
View CBS News In
CBS News App Open
Chrome Safari Continue
Be the first to know
Get browser notifications for breaking news, live events, and exclusive reporting.