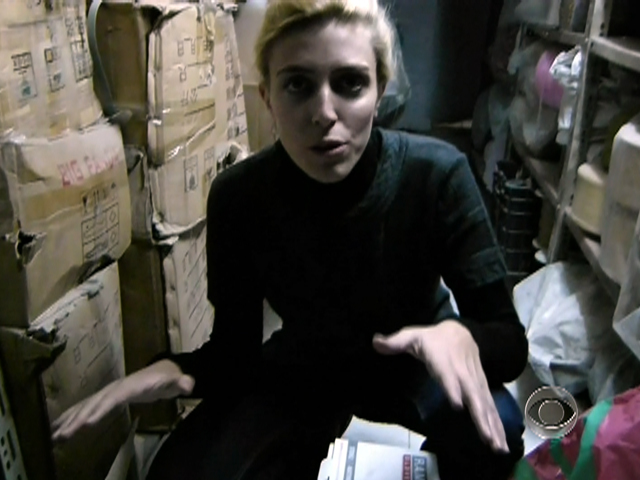 Since March, a protest movement in Syria has been trying to overthrow the 40 year dictatorship of the Assad family.

The U.N. Estimates 4,000 civilians have been killed. CBS News doesn't know much more, because the Assad government has banned independent reporting.

But CBS News correspondent Clarissa Ward managed to slip into Syria with a camera. She reports on how the rebels cope with casualties from street battles they fight with the Syrian Army. They cannot show their faces, and they risked their lives to speak with CBS News.

DAMASCUS - As an opposition activist, Abu Ahmed spends a lot of time underground. In the basement of a building on the outskirts of Damascus, he led us into a secret passage carefully camouflaged in a corner.

Inside, boxes are stuffed with life-saving medical supplies like penicillin, surgical gloves and perhaps more ominously, a skin stapler.

CBS News correspondent Clarissa Ward was taken to a make-shift hospital in a Damascus suburb. One doctor explained that going to a government-run hospital is too dangerous.

"There have been many cases where injured people were arrested or even taken out of operating rooms mid-surgery," he said. "Sometimes they kill the wounded."

CBS News has no way to verify his claim. None of the doctors who treat injured protesters can reveal their identities. In Assad's Syria, saving lives can be a crime. "We just do what we can," the doctor said.

Syria is a country of many grieving families.

One man told CBS News his 21-year-old son was shot by security forces while attending a demonstration. Despite the risks, he took his son to a government hospital. "They didn't even let us in," the man said. "They said they wouldn't take injured civilians."

He says his son bled to death. "He was just a normal young man, very quiet, very obedient. He was very loved."

Across the city, we saw signs of a different kind of suffering. Syria's economy has been crippled by tough sanctions. Basic necessities are scarce. People line up for gas.

"So we've just had another blackout," Ward said. "The government has been keen to stress that life continues as normal here in Damascus but certainly since I've been here, the last few days, the electricity has been in and out."

Abu Ahmed has no doubts about what would happen if the government discovered his stockpile. "They would kill me," he said simply.

But he says he is ready to die for his cause. He showed a video on his cell phone, of a man, he says was shot in the heart by a sniper. The video shows him washed before his burial. His face is the only face CBS News can show you from Syria.