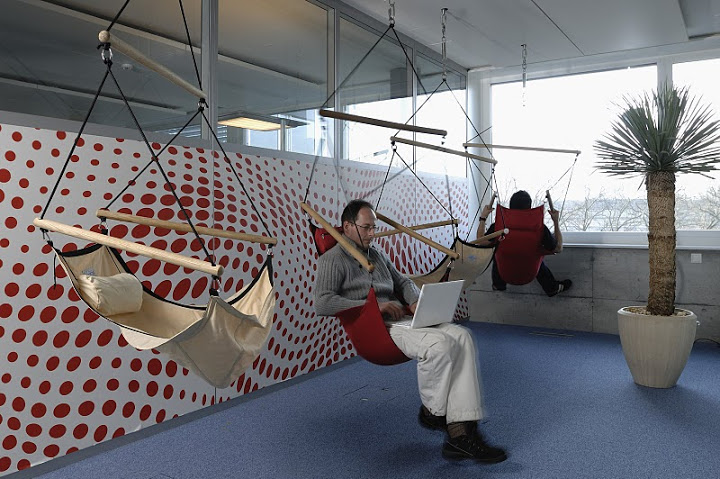 (CBS News) Google has been named the best company to work for in America again, CBS News reported last week.

Google named best company to work for for fourth year

About 2.5 million people send their resumes to the high-tech giant every year, and, as CBS News learned, human resources at this company is also a science.

The Google campus in Mountain View, Calif., is considered the good life for employees. The company offers comforts, privileges and perks to its employees that workers at most other companies can only envy. But what may seem like luxuries are actually good business and Google can prove that because the company studies everything it does.

Laszlo Bock, who heads Google's People Operations Department -- human resources in most companies - said, "We try to bring as much analytics and data and science to what we do on the people side as our engineers do on the product side."

Google's talent for data mining gives him detailed information on what pays off. Bock said, "When an employee starts on their first day, we have data that says, if the manager shows up and says, 'Hi nice to meet you, you're on my team, we're gonna be working together,' and does a few other things, those people end up 15 percent more productive in nine months."

To make sure the rest of a Googler's career remains productive, is David Radcliffe's responsibility. He's in charge of creating the perfect environment.

Radcliffe, vice president of Google's Real Estate & Workplace Services, said, "We thought it would be a great idea to build a building that allowed us to really try out new things and find out what works and what doesn't work."

He's in charge of creating the perfect environment, what the company calls, Radcliffe said, "our living laboratory."

Inside the living lab, Radcliffe's team tests everything, from floor to ceiling. Diner booths, it turns out, can work better than traditional conference rooms.

Radcliffe said, "Casual collisions are what we try and create in the work environment. You can't schedule innovation, you can't schedule idea generation and so when we think our facilities around the world we're really looking for little opportunities for engineers or for creative people to come together."

The rooms Google has created for those creative people include ski gondolas in the Zurich office, a pub-like meeting room in Dublin, and sidewalk cafe in Istanbul.

The designs are to help employees, according to Bock. He said of one conference space, "The idea behind this is the employees should own their individual space, be as creative as possible and we shouldn't get in the way."

When all that innovation gets too much, there's a solution for that, too -- a nap pod. Radcliffe said, "No workplace is complete without a nap pod. We found that the five-minute to 15 minute power nap, works on Sunday before you watch the football game, why not here at work?"

The lab searches for building materials that are free of chemicals, such as soy foam furniture. Even the impact of paint colors is analyzed. Radcliffe said of one purple space, "We actually get a negative response out of this color so you probably won't see it popping up in other parts of the company. ... I don't know what it is. I actually like the color myself, but it doesn't work in the work environment."

While unhappy workers sometimes feel they're toiling on a treadmill, Google offers treadmill desks as an option. Research has shown that walking while you work can be good for your health.

The company maintains 1,000 bikes on campus and gives workers their own garden space to grow vegetables.

Bock said, "We started experimenting with what we call 'nudges,' which are small interventions we can make that don't force people down a path, but make it easier to make a better decision."

"Nudges," promoting smaller plates increased their use by half. Food choices are now color-coded green, yellow and red -- red being the least healthy. Salads and greens moved to the front of the line and sugary snacks became a bit harder to find.

Bock said, "We took the sweets, M&Ms for example, and we moved them a little further down the shelf. And what we found was over a seven-week period we actually had people consume over three million fewer calories of M&Ms."

Ultimately, the goal behind all of this number-crunching is to extend the life of the average Googler by an astonishing 30 years. The company wants people to live longer, Bock said. "It's funny," he said. "I think our oldest Googler is 83 years old and we want people at Google for a lifetime."

Watch John Blackstone's full report in the video above.