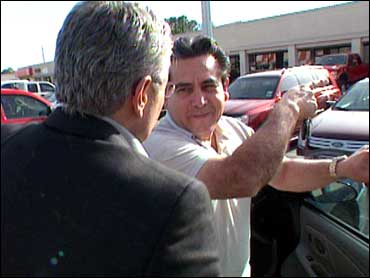 A Houston medical clinic is in the business of managing pain. But in reality, it's a front for a far more dangerous operation.

"When I saw it the first time, it shocked me," one former employee told CBS News chief investigative correspondent Armen Keteyian.

The former employee, who asked for anonymity, said inside the clinic, prescriptions for dangerously addictive drugs like the painkiller Vicodin, the muscle-relaxer Soma and the anxiety drug Xanax are illegally handed out like candy.

"In reality, it's drug-dealing," the former employee said.

Law enforcement sources estimate there may be tens of thousands of these so-called "pill mills" operating nationwide.

CBS News sent a healthy woman inside the clinic, posing as a new patient in pain, with a hidden camera rolling.

"Do you have your medical records? MRI records?" the receptionist asked.

"No," the patient replied.

"Can I see your ID, please?" the receptionist said.

It turns out the patient didn't need any records — just cash.

"Our office visits are $80," the receptionist told her.

Once paid, an attendant checked the patient's weight and blood pressure. Then it was time to meet the doctor.

"What's your name?" the patient asked.

"Manuel Hernandez," was the reply.

"You are the doctor here?" the patient asked.

"Yes, with my boss," Hernandez said.

In violation of Texas law, there's no physical exam and no review of medical history. But getting drugs of choice was easy.

"Can I get Vicodin or Lorcet?" our undercover patient asked.

"You said Lorcet and Soma," Hernandez replied. "You want that?"

Is this the kind of stuff the Drug Enforcement Administration would like to put an end to?

"Absolutely, absolutely," Joe Rannazzisi, a top DEA official, told Keteyian. "What they're doing is way outside the scope of medical practice."

And increasingly, it appears, outside the reach of the DEA. Despite a recent rash of arrests, only 249 doctors have been arrested by the agency in the last four years.

"These guys are very very good at staying under the radar," said Dr. Andrea Trescot, a leading pain specialist. "It is a huge societal problem. What they're causing are patients to get addicted and potentially die."

In all, CBS News sent four people into the Houston clinic. Same scenario: no exam, no records. And the same result.

The prescriptions were all faxed to a nearby pharmacy, where we got hundreds of Vicodin, Xanax, Soma — 720 pills total, each and every one prescribed by one man.

Keteyian caught up with him in the parking lot at the end of another very busy day.

"Why are you prescribing painkillers to people who go in there?" he asked.

"No, you're the guy who's doing it. Why are you prescribing painkillers without physical examination and without looking at anybody's records? Why is that? Are you even a doctor, Dr. Hernandez?" Keteyian asked.

Fact is, Manuel Hernandez is not a licensed doctor. So how did we get all our pills? Against federal law, the clinic put them in the name of a doctor we never met — and couldn't find.

State records show the clinic was set up by still another doctor, Rodolfo Giraldi, who failed to respond to numerous requests for comment. But right after the first letter, the door was locked — his clinic closed for good.

However, there's nothing to keep him from opening at another location — and going right back into the drug business.