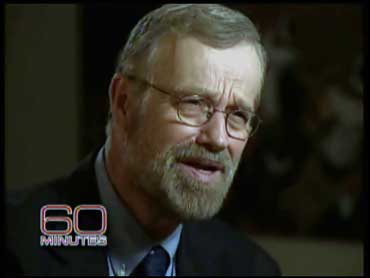 All of us have different faces we show the world. One personality for family and close friends. Another, perhaps, at work. Another for strangers. Maybe even a hidden face that we show to no one.

Imagine if all of them were walled off from each other in your mind. And you, the dominant personality, had no clue the others existed.

The central character of this story is a man of great achievement who's written a book about his own experience with multiple personalities, a memoir aptly called A Fractured Mind, about the secret lives that he led and the secret knowledge he has now decided to reveal.

"It's a very hard thing to talk about because as soon as you broach it, if you don't tell the whole story, you sound like a raving lunatic," says Robert Oxnam.

Oxnam is a distinguished international scholar. He is a specialist on China, steeped in both its ancient and contemporary history, its culture and its language.

But Oxnam is also 'Bobby,' a devil-may-care Rollerblader in New York's Central Park. Bobby is one of three personalities who are no longer walled off but still co-exist with Robert.

"I'm dominant in that I'm the front guy. It's my job," Oxnam explains.

When asked if he speaks for all the personalities, he says "I speak for all of them, and when I don't there's hell to pay."

Perhaps it is significant that, as a kid, the author of A Fractured Mind was obsessed with Humpty Dumpty, the nursery rhyme character who is shattered.

Oxnam grew up under great pressure to succeed. His father was a university president, his grandfather a Methodist bishop and president of the World Council of Churches.

And he did not disappoint. While still in his thirties, he was named president of the Asia Society, a renowned cultural and research institution. Policy makers and journalists – like Walter Cronkite – sought out his views.

He was also a tour guide in China to the rich and influential, like Warren Buffett and Bill Gates.

The public Robert Oxnam was on top of the world. But on the inside, he says there was a combination of deep depression and anger, and occasional rage. "And a sense, therefore, that there was glittering success out here and ongoing decay, and it got worse," he added.

In the 1980s, he was dogged by alcoholism and bulimia and his first marriage fell apart. He saw a psychiatrist but his problems, including blackouts, continued.

Oxman would wake up with burns and scratches on his body but he had no idea what had caused them. "I not only had no idea, I had no memory of the context in which it occurred," he says.

And he had another life going on. He would find himself hanging around Grand Central Station in New York City, lost in the crowds in a kind of trance. And he would hear voices.

"The voices were sometimes in my head and sometimes spoken. And it was startling to hear. 'You're bad. You're terrible. You're the worst person who ever lived,'" Oxman recalls.

And then in 1990, during a routine session with his psychiatrist, Dr. Jeffery Smith, Oxnam suddenly became someone else.

"There was a complete change. His eyes kind of fluttered, like that. And there was a change in his voice and his demeanor and his movements. And he was really a different person," Dr. Smith remembers.

"There was no knowledge except the knowledge that I was fading out. It was almost like going through, having anesthesia, that you were blacking out, leaving the stage," Oxman says.

During the session, Dr. Smith says Oxman's hands were claw-like and he was angry and hissing. Afterwards, he told his patient that he had been dealing with an angry little boy named 'Tommy.'

Dr. Smith realized that he might be dealing with 'multiple personality.'

Oxman's first reaction was "This is hogwash. I've seen 'Sybil'. I'm not like Sybil," referencing the 1976 TV movie based on a book about a real-life case of a woman with 16 personalities.

The movie put multiple personality disorder in the public eye and led to a huge increase in such diagnoses.

In Oxnam's case, 11 distinct personalities emerged. Among them were 'Tommy,' the angry adolescent, the 'Witch,' a frightening presence and 'Bobby,' the troubled young Rollerblader.

Publicly, Oxnam went about his business at the Asia Society, meeting and greeting the Dalai Lama and other dignitaries, and giving no hint of his private turmoil.

Soon, he realized the voices he heard belonged to his various personalities.

In 1991, as he was hosting a dinner for the first President Bush, the chatter inside Oxnam's head was relentless. He wanted all of his personalities to be quiet. "Just be quiet, let me do this. We'll have the event, everything will be fine and then you can speak up," he remembers thinking.

The talking continued right through the President's speech. Most of it was from Oxnam's alter ego Bobby, the Rollerblader and troublemaker.

Oxman remembers Bobby was talking to him, saying "This is boring" and "Aw, that's cool. Look at the Secret Service people up in the balcony."

Vishakha Desai married Oxnam soon after 'Bobby' and the other personalities revealed themselves. She is also an Asia scholar and the current president of the Asia Society.

Desai remembers when Oxman first revealed the disorder. He said 'I need to tell you that I'm seeing a psychiatrist. And I have this disorder,'" she recalls.

"It wasn't until when I asked to meet the witch that it really brought it home," Desai says.

"The face completely changed. And there was a tremendous amount of hissing and anger, including towards me," Desai remembers. She says the witch personality told her "You think you're gonna solve Robert's problem? I'm gonna teach you a thing or two because you think he's a good guy. I'm gonna show you that he's a bad man."

Childhood trauma is often at the root of multiple personality disorder, and Oxnam appears to be no exception. During therapy a new character emerged. 'Baby' told a tale of childhood abuse.

Oxman says it was sexual abuse and always accompanied by the words "you're bad, and that's why it's a punishment." Oxman says he was threatened with having his body or a hand put in boiling water. "I was locked up in an old ice box," he says.

The abuser, who he will not name, was someone close to the family.

We asked him to read a passage from the book.

Robert Oxnam is well aware that his story is a surreal one and that not everybody will believe it. The American Psychiatric Association does consider multiple personalities a true mental disorder, one now called Dissociative Identity.

But on the issue of recovered childhood memories – such as Baby's tale of
abuse – the APA notes "some individuals with this disorder are highly hypnotizable and especially vulnerable to suggestive influences."

Recovered memory is still a controversial diagnosis and some think that the memories of other personalities are implanted by psychiatrists.

"I'm not a therapist. I can only tell my own story. I do know that there was no implanting whatsoever. Each time that a personality emerged it was never a suggestion, it was never 'Wouldn't it be good if this happened,'" Oxman said.

Nevertheless, both multiple personality and recovered memory are concepts that continue to divide the psychiatric community. But that has not shaken the belief of Oxnam or his doctor, who swears he never planted anything in Oxnam's mind.

"I would never suggest details. And I think no sensible clinician would do it," Dr. Smith said.

Today, many of Oxnam's personalities have merged, leaving just four. There's Robert, Bobby and Tommy. And the witch has become a woman named Wanda.

He is in constant negotiations with his personalities, living under a kind of truce dominated by Robert – most of the time.

Oxnam says he is not cured and that setbacks are generally set off by some emotional problem or unexpected advance. "The death of my mother last year gave rise to a suicide attempt. I mean, the whole system kind of shattered," he recalls.

Bobby was the suicidal personality inside Oxnam. "Bobby is almost like a spark
plug inside of us, and it keeps firing. But when that spark plug gets clogged, the whole engine goes down. That's Bobby," he explains.

But it is also Bobby, who is the happy-go-lucky, sunny, carefree part of sober-sided Robert, who got him into trouble.

He had a brief affair with a young woman he met in the park, an affair that threatened Robert's marriage. "The hard thing was that it was Bobby's love affair, but I had turned away and let it happen," Oxnam says.

We asked Oxnam whether he was concerned that people might say he was avoiding responsibility for the affair by blaming 'Bobby.'

"Absolutely. I'm not going to sit here and say, 'No, it wasn't me. I didn't have the affair.' Of course it was me, part of the package me that exists," he says.

Vishakha forgave him – or them – but freely admits living with multiple personalities is no picnic.

Asked if there was a time when she considered putting an end to the relationship, she replies, "Sometimes for brief moments. But never at the point where I've felt like 'Forget it.' It's difficult some times. Life is difficult. So what? You just do it."

For most women, one husband is often more than enough, but Vishakha must deal with an entire committee.

But Robert may have an advantage having Bobby around: he'll never really grow old.

Vishakha agrees. "Exactly. And I feel like it rubs off on me."

"I tell you, it has a downside because when you have an 18-year-old go running out on Rollerblades for five hours skating on the weekend, a 62-year-old has the aches and pains at the end of the evening," Oxnam added. "I'm not kidding."