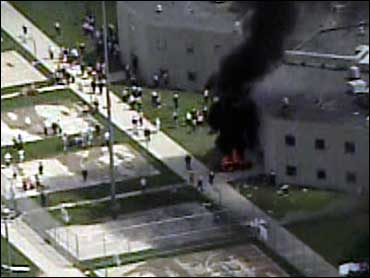 Indiana Department of Correction spokeswoman Java Ahmed said more than one cell house was involved in the disturbance at the New Castle Correctional Facility, about 43 miles east of Indianapolis.

Correction Commissioner J. David Donahue said the riot began after a group of inmates from Arizona took off their shirts in the prison's recreation area to show staff they wouldn't comply with orders. They had been told to keep them on.

Pictures taken by a television helicopter owned by CBS affiliate WISH in Indianapolis, Ind., showed at least three fires burning around the facility.

Authorities later secured the prison perimeter and confirmed that no inmates escaped, although some were still out of their cells, Indiana State Police Sgt. Rod Russell said. All staff members were accounted for.

Authorities did not release the condition of the two injured staff members, though Donahue said neither suffered serious injuries.

One man was knocked down by inmates in the courtyard, Donahue said. He did know how the other person was injured.

Five inmates were treated for effects of tear gas that authorities used to quell the disturbance, said Trina Randall, a spokeswoman for GEO Group Inc., the Boca Raton, Fla.-based company that manages the prison.

In March, Arizona and Indiana reached an agreement on housing up to 1,260 Arizona inmates.

Arizona Department of Corrections spokeswoman Katie Decker said at least some of the transferred inmates had complained about being moved, a step that was necessary because of the state's shortage of prison space.

"They're obviously resentful because they had to leave the state," she said, adding that it was too early to say whether the transfers played any role in the riot.

Decker said the inmates sent to New Castle were "carefully picked" before being transferred and could have "no predisposition to violence."

The prison housed an average daily population of 450 in 2005, according to the DOC web site. It also has a psychiatric facility that treats inmates who are bused in from other prisons.

GEO Group last year contracted with the Indiana Department of Correction to assume management of the prison.