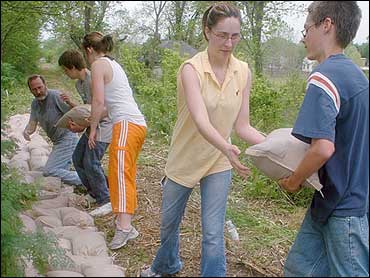 Near-record flooding that inundated the village of Big Lake earlier this week broke more levees Thursday, and water levels were expected to peak in some spots this weekend. In other areas, however, the danger appeared to be passing.

The Missouri River had dropped a few inches Thursday near Craig, where inmates from a St. Joseph prison and National Guard members spent Wednesday sandbagging, trying to protect the water treatment plant, schools and an ethanol plant.

The water got within "a hillbilly's whisker from going over in several places," Holt County Sheriff Kirby Felumb said Thursday.

State officials said dozens of levees — most protecting agricultural land — have been topped or breached since a weekend of drenching thunderstorms raised rivers and generated tornadoes that claimed 12 lives in Kansas. No serious injuries or deaths had been reported in the flooding, said Brian Hauswirth, a spokesman for the State Emergency Management Agency.

The most recent levee break occurred Thursday afternoon between the towns of DeWitt and Brunswick, spilling Missouri River water on farmland, slowing traffic on U.S. 24 and damaging railroad tracks. Another Carroll County breach south of Norborne had flooded about 15,000 acres of cropland and left about 75 rural homes surrounded with Missouri River water.

Big Lake, in Holt County in northwestern Missouri, suffered some of the worst damage in flooding Monday night and Tuesday, after several area levees were breached. Most of the 32 rescues the Missouri State Water Patrol has conducted since flooding began have been in the Big Lake area.

By Thursday, rooftops were still all that could be seen of some of the 450 to 475 homes flooded in Big Lake. Authorities spent Thursday taking some residents to rescue their pets and retrieve medication.

"We can't do much for the property," Felumb said. "There's no need to let a family pet die if we have resources."

Statewide, the flooding has led to the evacuation of several hundred people, including some residents of Levasy and the Ray County town of Hardin, where the 1993 flood surge toppled headstones and unearthed hundreds of caskets.

In Levasy, a breached levee left at least 15 homes with up to 8 feet of water in them, said Deputy Ronda Montgomery, a spokeswoman for the Jackson County Sheriff's Department.

State officials said two other communities — Rushville and Napoleon — were within 500 feet of levees that were broken or overtopped. But the damage was less extensive, Hauswirth said.

Although the river crests were lower than forecast in many areas, residents remained anxious. Many were here for the 1993 floods, among the most costly in U.S. history.

The rain-swollen rivers and streams that make up the Missouri River system are causing damage in different spots as the water makes its way eastward toward St. Louis, where the Missouri River meets the Mississippi, said Suzanne Fortin, a meteorologist with the National Weather Service.

In Jefferson City, the Missouri River was expected to crest Sunday at 8.7 feet above flood stage, which could cause flooding at the municipal airport and other low-lying areas below the bluff where the state Capitol sits.

During a briefing at the State Emergency Operations Center, Gov. Matt Blunt said joint state and federal damage assessment teams were being dispatched to 17 counties, and about 100 Missouri National Guard members had been deployed around the state.

The U.S. Army Corps of Engineers has prepared about 1.2 million sandbags, about 132,000 of which already had been distributed to help fight the flood by Wednesday, Blunt said.

Prisoners were filling sandbags Thursday at the prison in Boonville, and a crew of inmates had been sent to the Cooper County town of Wooldridge to stack the bags on top of a levee that protects the community from the Petite Saline Creek.

Torrential rain Thursday caused flash floods in parts of southern Missouri, closing some roads. Near Gravois Mills, in Morgan County just northwest of the Lake of the Ozarks, authorities said the normally empty Little Proctor Creek filled with 4 to 6 feet of water in 20 minutes.

East of Jefferson City, the Missouri State Water Patrol closed a stretch of the swollen Osage River to boaters.