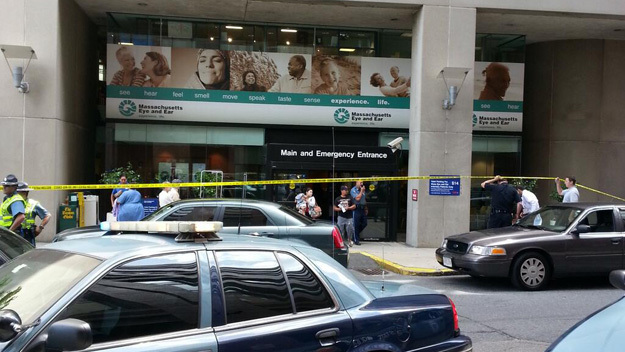 (CBS/AP) BOSTON - An inmate being taken for treatment at a specialty hospital in Boston shot a deputy sheriff after a struggle over the officer's gun Wednesday, then was shot and critically wounded by a second deputy, police said.

Boston Police Commissioner Ed Davis said the shooting happened around noon in the emergency room of the Massachusetts Eye and Ear Infirmary. The two officers from Middlesex County were removing the inmate's handcuffs when the man grabbed for the gun of one of the officers, Davis said. During the struggle that followed, one of the deputies was shot in the leg.

The other deputy sheriff then fired his weapon, striking the prisoner in the chest, Davis said.

The wounded officer was taken to nearby Massachusetts General Hospital, where he was in stable condition. The inmate, taken to the same hospital, was believed to be in critical condition.

Authorities didn't immediately release the names of the officers, but Davis said no one else was involved.

"It's all been contained," Davis said. "Everybody is either in the hospital or in custody."

Essex County Sheriff's Office spokesman Deputy Maurice Pratt said the prisoner is Raymond K. Wallace, 35, of Salem, who was transferred from the Essex jail to Middlesex County last year for his own protection after authorities learned he had "enemy issues" among some Essex inmates. Wallace awaits trial on armed robbery, masked robbery and firearms charges from 2011.

Jennifer Street, a spokeswoman for the Massachusetts Eye and Ear Infirmary, said the hospital remained open, but the emergency room was closed until 6 p.m. while authorities investigated.

The Middlesex County Sheriff's office said it is "focused on the safety and well-being of the officers involved." The office said it would release more information later.

Boston is located in Suffolk County, and the Suffolk District Attorney's office is working with police on the investigation. The district attorney's office reviews use of potential deadly force by officers.