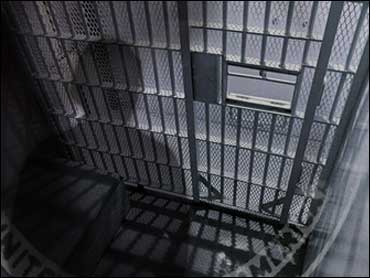 An Arkansas prisoner nearly died after guards left him lying naked in his own feces for a weekend, and while investigating the incident corrections officials found that guards received lap dances while on the job, documents obtained by The Associated Press show.

The prison system fired Lt. John Glasscock, who supervised guards on duty at the maximum-security Tucker Unit prison. One sergeant was fired, another was demoted and three others received written warnings, according to a report stamped "Sustained (Allegation is True)." The report said Glasscock gave false information to investigators and did substandard work "resulting in injury and/or property damage."

The disclosure of the inmate's near death comes after two convicted murderers escaped a different state prison by wearing guard uniforms and officers at the Tucker Unit fatally shot a man who officials said fled from a contraband checkpoint.

Combined, the incidents raise new questions about a troubled state prison system described by a federal judge 40 years ago as a "dark and evil world."

Prisons spokeswoman Dina Tyler described the inmate's near death as unprecedented. "I think what you've got here is a case of a couple of officers who were not doing their jobs up to their standards and we took appropriate action," Tyler said Monday.

The internal affairs report, obtained by the AP through a state Freedom of Information Act request, said guards discovered the inmate Jan. 19 after he had smeared waste over his body and played with it.

James Gibson, an internal affairs investigator for the state prison system, wrote in the report that no one on the night or day shifts did anything to clean up the inmate, whose name was redacted, or his cell.

"In fact, food trays were put in there on the bars for him to eat," Gibson wrote.

By Feb. 10, the inmate was on life support at the University of Arkansas for Medical Sciences hospital in Little Rock after suffering through septicemia and septic shock, conditions which send virulent microorganisms from an infection into the blood stream, the report shows.

Warden David White fired another sergeant involved, Bobby Lunsford, on Feb. 11. The sergeant told investigators he informed another supervisor about the inmate, but that person wasn't working at the time Lunsford was there, the report shows. A telephone number for Lunsford could not be found Monday, and Gibson wrote in his report that Lunsford did not return messages left for him on a cellular phone.

By Feb. 20, an unnamed sergeant told investigators that Glasscock spent "hours" with female officers in a prison office and that a nurse performed a nighttime lap dance on Glasscock within the sight of several inmates, according to the report. That sergeant also apparently received a lap dance.

The report also claimed a sergeant told investigators that inmates would be brought in to cook for the night shift officers.

Glasscock denied the allegations against him, though he acknowledged he "messed up" by not doing rounds at the facility, the report shows.

Records show Glasscock joined the prison system as a guard in November 1996, and never was demoted or had a disciplinary infraction previously, officials said. A telephone number listed in Glasscock's name rang unanswered Monday.

The maximum-security unit at Tucker, 30 miles southeast of Little Rock, has 532 inmates. About 100 serve as workers and live in a barrack-style dormitory, said Tyler, the prison spokeswoman.

The inmate who was hospitalized is now at the prison system's Diagnostic Unit in Pine Bluff. Tyler said he had violated prison rules several times, including a few violent incidents.

The Arkansas prison system, now nationally accredited, has a troubled past. It was declared unconstitutional four decades ago by U.S. District Judge J. Smith Henley. Back then, trusted inmates would be armed and police other incarcerated inmates. State police reports documented inmates living under brutal conditions.

In 2007, officials fired guards at the East Arkansas Regional Unit at Brickeys for using excessive force against inmates. In May, convicted murderers Calvin Adams and Jeffrey Grinder escaped the Cummins Unit wearing guard uniforms made at the prison. Police caught them in upstate New York, where officers found them with badges that looked like staff identification.

And last Saturday, a guard at Tucker fatally shot a Heber Springs man wanted for failing to report to his parole officer. Tyler said at the time the man crashed his car into the assistant warden's car and came "very close to the officers" before being shot.

Lawmakers have scheduled a meeting with prison director Larry Norris in the coming weeks to discuss the recent prison escape. Matt DeCample, a spokesman for Gov. Mike Beebe, said the governor continued to support Norris' work at the department.

"When things have gone wrong, action has been taken and that's very important to us," DeCample said. "If things were going wrong and no one seemed to be taking no action to fix it, that's where we'd be greatly concerned."