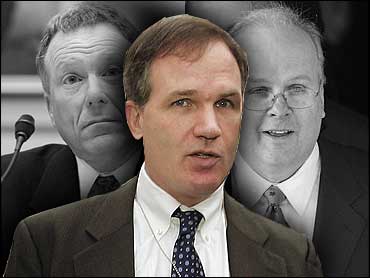 
I've been catching flak for suggesting that "Scooter" Libby ought never to have been on trial at all. "Aha," say my critics, "we remember how outraged you were at Bill Clinton's 'perjury,' but now that the shoe is on the other foot, you're crying foul. Too bad!" (I've cleaned up some of the language.)

If we're going to have a hypocrisy contest, I'd be glad to put into evidence the thousands of liberals who sputtered with indignation at Clarence Thomas's supposed sexual harassment of Anita Hill and at former Senator Bob Packwood's groping of an assortment of lobbyists and staffers, but then hotly denied that Bill Clinton's sexual predations were relevant to the public's business.

That much having been said, I deny that the cases are comparable. Patrick Fitzgerald, transformed into Ahab by the post of independent counsel, seized upon inconsistent statements by Libby and other witnesses to bring a perjury action. Now that the verdict is in, many on the Left are admitting that Libby wasn't the issue at all. Howard Fineman analyzed it this way in Newsweek: "The ramifications of the stunning, vehement verdict in the Scooter Libby trial — that he lied, repeatedly, big time — aren't really about Scooter Libby at all. They are about how and why we went to war in Iraq, and about how Vice President Dick Cheney got us there." The New York Times announced editorially that, while they didn't like Fitzgerald putting reporters in jail, "it was still a breath of fresh air to see someone in this administration, which specializes in secrecy, prevarication and evading blame, finally called to account."

Excuse me, but Libby is not being "called to account." Tony Blair is called to account in Parliament at Prime Minister's Question Time. Mr. Libby faces prison. And for what? Because a Kerry-supporting, proven liar called Joseph Wilson persuaded the press that the White House committed a crime in outing his CIA wife. Prosecutor Ahab Fitzgerald knew that this was not true; that Richard Armitage (an opponent of the Iraq War, by the way) was the leaker; and that the whole purpose of mentioning Valerie Plame was not to destroy her career or, God forbid, endanger her life but rather to explain the otherwise mysterious decision by elements of this administration to send that guy on a sensitive mission to Niger.

We are told that the case reveals how "obsessed" the vice president's office was with the Wilson business. This is highly doubtful considering the range of matters the administration was then contending with. But suppose they were? The tacit assumption that there was something sinister about the vice president attempting to rebut a very damaging op-ed in one of the country's most influential newspapers is nonsensical.

This is a textbook case of the criminalization of policy differences. If Bush haters believe that the president "lied us into war," they are fully entitled to support a Democrat in 2008. But their blood lust will not be satisfied with that. Libby must be led away in handcuffs.

Libby was convicted of lying about how and when he learned that Valerie Plame was a CIA employee. Though trial watchers are suggesting that his memory lapses are not credible, we can certainly agree, can we not, that this datum was of less than intimate interest to Mr. Libby?

Much as one hates to go over this ground again, let's recall that President Clinton, by contrast, was testifying about matters that human beings simply do not tend to forget. Here is an excerpt from his deposition "Did you have an extramarital sexual affair with Monica Lewinsky?" Answer: "No." Mr. Clinton further denied having encouraged Ms. Lewinsky to lie in a sworn statement (suborning perjury), and testified that he could not recall ever being alone with her.

Lewis Libby was doing his best to serve the country and was sandbagged by an out-of-control prosecutor and a lynch-mob press. This miscarriage will leave conservatives bitter. Don't be surprised if the worm turns again.
By Mona Charen
Reprinted with permission from National Review Online