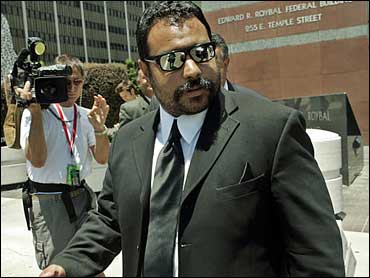 The head of security for Death Row Records threatened to "get" Notorious B.I.G. in retaliation for the killing of Death Row star Tupac Shakur, Shakur's former bodyguard testified Wednesday.

Kevin Hackie took the stand saying he feared for his life as a key witness in the federal wrongful death trial. The lawsuit filed by B.I.G.'s family blames the Los Angeles Police Department and city for the rap star's death.

Hackie, who was an FBI informant while serving as Shakur's personal bodyguard for three years, said his security boss, Reginald Wright, told him before B.I.G. was killed, "We were going to get those (people) who downed 'Pac - Biggie and his crew."

California rapper Shakur was gunned down on the Las Vegas Strip six months before his New York rival B.I.G. was shot to death in Los Angeles. The slayings have long been linked in hip-hop lore and news media accounts, though never in court.

Hackie's testimony was unable to definitively connect Death Row to a former rogue Los Angeles police officer at the heart of the case.

Hackie initially said he saw the former officer, David Mack, at numerous Death Row events, sometimes speaking with the record label's leader, Marion "Suge" Knight. But he acknowledged under cross-examination that he only saw Mack with Knight and associates at several large parties or "social functions," including a prizefight in Las Vegas and an MTV shoot in Malibu.

Testimony in the case began slowly Wednesday as attorneys for B.I.G.'s family tried to tie Mack to both Death Row and to the Mob Piru Blood street gang.

According to the theory underlying the suit, Mack arranged to have a college roommate driving Mack's car shoot B.I.G. at Knight's behest. Both Mack and the alleged shooter, Amir Muhammad, have been dropped from the family's suit and have never been named as criminal suspects.

B.I.G., born Christopher Wallace, was gunned down shortly after midnight on March 9, 1997, while leaving an awards show after-party. FBI and LAPD investigations have foundered, which a gang expert testified Wednesday was not unusual in gang killings.

The Compton gang expert, Los Angeles County Sheriff's Detective Timothy Brennan, said he knew nearly every gang member in Compton, adding Mack was not one of them. Brennan said he has worked in Compton and met with its gang members since 1982.

Former Los Angeles Police Chief Bernard Parks, now a city councilman, was the first witness to testify, but said he didn't have any detailed knowledge of the investigation into Wallace's killing.

When Hackie took the stand, he explained that he didn't want to be in court because "this is all going to be on the 6 o'clock news" and he feared "retribution by the Bloods, the Los Angeles Police Department and associates of Death Row Records." U.S. District Judge Florence-Marie Cooper had issued an arrest warrant to compel testimony from Hackie, who now runs a private security firm.

Hackie told a Los Angeles Times reporter last week that he took medication that affected his memory, but on the stand Wednesday he denied any memory problems.

He did acknowledge he had hoped to back out of testifying after learning he would be the "quote-unquote key witness." The family's attorneys have said several witnesses are refusing to appear because they're afraid of retaliation.

Hackie also denied saying some things attributed to him in a June 2004 declaration prepared by plaintiffs' attorneys, including an assertion that "It was well known that David Mack was a covert agent for Death Row Records."

He also criticized the lawsuit's motives.

"You have no weapon, you don't have a direct link to an actual suspect," Hackie said, "so obviously this time it would be for monetary purposes."