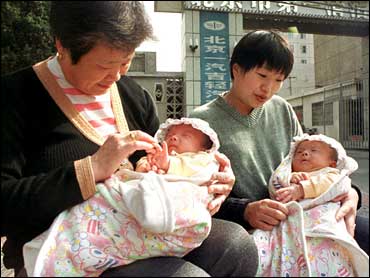 The trade is illicit but thriving: baby girls, abducted or bought from Chinese farm families, sold to others who want a daughter, a servant or a future bride for a son.

And despite police crackdowns on gangs that sell thousands of babies a year, the government's own birth-control policies that limit most couples to one child appear to add to the demand.

The discovery last week of 28 baby girls, none older than 3 months, packed in nylon tote bags aboard a long-distance bus in southern China was a striking example of the trade but far from unusual, Chinese officials and experts in family issues say.

Most buyers of baby girls are families that have a boy and want a second child, said an official in Beijing for the official All-China Women's Federation. Sometimes, she said, a girl might be kept to work around the house or till the fields until she is a teenager, then sold to a family whose son needs a wife.

The baby girls might have been abducted, abandoned or sold by their parents, said the official, who would give only her surname, Li.

"In infant trafficking rings, many children's parents are also the sellers," Li said. "So in many cases, it's almost impossible to find out the origins of the children."

The scale of the trade isn't clear, but China's Justice Ministry says a three-month-long nationwide crackdown in 2000 resulted in the rescue of some 10,000 babies.

Chinese society has never valued girls as highly as boys, who carry on the family name and look after elderly parents. By contrast, girls join their husbands' families — prompting a folk saying that raising a daughter is like "watering another family's field."

Until the 1940s, girls were considered so unimportant that many weren't given names until adulthood.

But Communist authorities — led by Mao Zedong, who famously remarked that women "hold up half the sky" — prided themselves on raising the status of women. Upon taking power in 1949, they ended the prewar custom of selling unwanted daughters to brothels or as servants.

But the trade has flourished anew amid looser social controls and tighter enforcement of "one-child" rules meant to restrain the growth of China's population of 1.3 billion people.

Parents are so intent on a boy that some abort female fetuses and kill or abandon baby girls in order to try again. That has led to a lopsided ratio of boys to girls that experts say could, in coming decades, leave tens of millions of men without wives.

Still, the shortage has prompted some parents to acquire future brides for their sons as babies, said Song, the newspaper editor. She said infants are considered more appealing because they are less likely to run away, will look on their buyers as their own parents and are cheaper than buying a teenage bride.

Buying a baby girl can cost as little as a few hundred yuan (less than US$100) and won't result in the fines imposed on couples who violate birth control limits, according to Song. Such fines can equal as much as six years' income.

"The demand has triggered the crime," she said.

The baby girls found last week in Binyang county in the Guangxi region, one of China's poorest, were aboard a long-distance bus searched by police at a highway toll plaza.

Police wouldn't release any details. County officials said Monday that 10 suspects have been detained, though police don't know where the babies came from or what their destination was.

Police suspect the babies were drugged to keep them quiet during the trip, the newspaper Beijing Morning News said.

One baby died after being found. The others were in "healthy condition" in a local hospital, said an official of the county Women's Federation who would give only her family name, Ying. She said families in the area have donated baby clothes, milk powder and diapers.

But no parents have come forward to claim them, and it isn't clear how authorities will find their families, Ying said. "They are too small to speak for themselves."