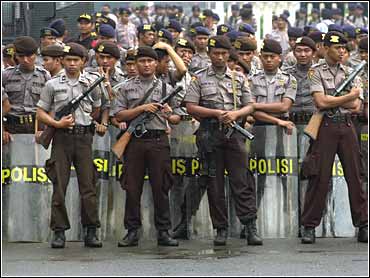 Indonesian head of state Abdurrahman Wahid said Tuesday he was ready to be impeached and, if dumped by lawmakers, would stand again for the presidency.

Until now, Wahid has vehemently refused to acknowledge the possibility that the nation's highest legislative body, the People's Consultative Assembly, would hold a special session to judge him over allegations of corruption and incompetence.

“If a special session is held and I am impeached, then go ahead I am not scared,” he told members of a military think-tank in Jakarta. “If that happens, I will campaign again in the next election to become president,” he said.

“I will campaign continuously. This is a pledge from a citizen who is going to be impeached.”

Wahid has denied any wrongdoing and accused lawmakers of “committing a huge violation” of the constitution by demanding his impeachment.

He said he would not resign because six provinces would break away and Indonesia would disintegrate.

Wahid was elected to office by the assembly in October 1999 as Indonesia's first democratically chosen leader in more than four decades.

His presidency began with hopes of reform after years of dictatorship. But it soon became mired in scandal and political infighting.

For many months he has openly clashed with parliament, which in turn has censured him twice over allegations of involvement in two corruption affairs.

Wahid has denied any wrongdoing.

His defiant vow to fight his opponents comes amid increasing pressure on him to resign or share power with Vice President Megawati Sukarnoputri, who is his constitutional successor.

He has refused to do either and appears to have shunned the advice of even his closest advisers to compromise.

Wahid made his statement hours after returning to Jakarta after a brief visit to neighboring Thailand.

Earlier on Tuesday, presidential aides dismissed reports that Megawati believed it was inevitable that a special session of the assembly would meet to impeach Wahid.

Megawati, who rrely talks to the media, has not commented on the media claims.

However, in a speech in the city of Pekanbaru, 800 kilometers (500 miles) northwest of Jakarta, Megawati said she was ready to abide by her party's policy guideline that she should aim to become president.

She gave no timetable and said stressed that any leadership change must be carried out in line with the constitution.

Separately, parliamentary speaker Akbar Tandjung said he was convinced that impeachment would take place in late July or August.

“The downfall of the president is certain if the special session is held,” said Tandjung, who heads the Golkar Party of former dictator Suharto.