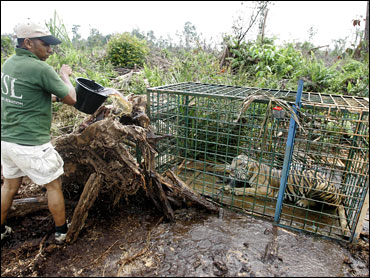 Indonesia's tiger catchers have a double job - protecting humans from tigers, and tigers from humans.

The elite teams of rangers and conservationists rush to the scene every time villagers report attacks or sightings of critically endangered Sumatran tigers. First, they calm the people. And then, if there are signs the animal is nearby, they return with steel cage traps, live bait, heat-sensitive cameras and other equipment to capture the magnificent beasts.

This time Sartono, who at 40 has spent nearly half his life in the job, arrives with his six-member squad at a remote oil palm plantation in Sungai Gelam district, 375 miles west of the capital, Jakarta, knowing they'll have to act fast.

Three people have been killed in less than a week - Rabai Abdul Muthalib, 45, a rubber tapper ambushed near a river, and days later, Suyud, 50, and his son, Imam Mujianto, 21, who were sleeping in their hut when the yellow-eyed tiger pounced through the thin roof. The beast devoured the brain, heart and liver of the youngest victim, spreading terror through surrounding villages.

Sartono knows if he and his team cannot put a quick end to the killing spree, residents will shoot or poison the Sumatran tiger, which is already on the brink of extinction because of rapid deforestation, poaching and clashes with humans.

There are only around 250 of the cats left in the wild, compared to about 1,000 in the 1970s, according to the World Wildlife Fund, meaning the Panthera tigris sumatrae could become the first large predator to go extinct in the 21st century.

The tiger catchers' job is to trap the animals, carry out health checks, fit them with GPS tracking collars and then release them back into national parks or other protected areas. Often they come back empty-handed, but this time, not long after beginning their intensive foot patrol through palm oil plantations and peatland forest, they have good reason to feel optimistic.

They find and snap photos of fresh paw prints and, together with experts from the Zoological Society of London, start repositioning their traps around the rugged Makin Group's palm oil plantation. They use a young dog and a goat as bait but place the animals in interior cages to protect them.

For the next few days, they hike beneath the equatorial sun, their clothes soaked in sweat, in search of clues, while other team members interview witnesses and check out rumors of more attacks and sightings. Finally, they have one of their own.

On a scorching Sunday afternoon, an adult tiger charges out of dense jungle brush and then suddenly retreats into the shrubbery. Slowly, as Sartono aims his cocked rifle at the trembling bushes, the squad walks backward.

"I was afraid, who wouldn't be!" the veteran tiger catcher later says with an uneasy laugh. "We might have experience, but we don't have superpowers!"

After the beast manages to bite off the goat's head and drag the so-called safety cage with its carcass into the nearby brush, the squad finally snags her. When they pull up to the site in their green pickup truck on day eight, they find a tigress six feet long - excluding the tail - crouched in the trap. First she is calm, then she explodes, growling and throwing her 180-pound body against the steel bars.

"Easy, easy, we're here to save you," whispers Nurazman Nurdin of the Nature Conservation Agency, as the crew carefully approaches the tigress, which has since been named Salma.

For the tiger catchers it is a tense but thrilling moment.

For villagers - who have locked themselves up after dark, shuttered stores, and canceled prayers in the mosque from dusk to dawn - it is a relief. Though some support plans to relocate the animal into a jungle far away, others wish the rangers would just shoot it. Many worry there may be more tigers out there.

They are right. Five more people have been mauled to death in the same area since the capture, all of them illegal loggers, including two this weekend. Since those attacks took place within the cats' habitat, there are no immediate plans to catch or relocate them.

Among the most traumatized is Efrianto, a 28-year-old villager who survived January's midnight attack on his uncle, Suyud, and cousin, Mujianto, by kicking a hole through the wall of their hut and running for help.

The men on the tiger team said it was disturbing - and rare - that Salma ate one of the victim's remains. Normally, Sumatran tigers avoid humans, but if they do kill a man, they usually leave the corpse untouched. The tiger catchers saw the unusual behavior as a sign of how desperately hungry the tigress must have been.

"There's no place for its prey to live here, all the land has been converted into oil palm plantations," said Nurdin, the Nature Conservation Agency official, as he surveyed churned-up wasteland and neat rows of trees.

As their name suggests, these tigers can only be found in the wild on Sumatra island.

Their habitat is disappearing at an alarming rate, with 667,000 acres of lowland forests being cleared annually, mostly for palm oil, which is used in cosmetics and candy but also to make "clean-burning" fuel for markets in the U.S. and Europe.

Other culprits are loggers and mining companies, whose projects limit mating grounds, leave remaining tiger populations isolated and scattered, and chase off the majestic cats' prey.

The biggest threat to conservation is conflict with humans, according to a recent report by the Forestry Ministry. On average, five to 10 Sumatran tigers have been killed every year since 1998, the report said, but four have been speared in the last month alone.

"At this rate, they will soon be extinct," said Hariyo Wibisono of Harimaukita, an alliance that coordinates 15 state agencies and tiger conservation groups.

Sometimes the animals are killed by frightened villagers, other times by poachers who sell their carcasses for trophies or to supply a growing demand for tiger bones in traditional medicine. A poacher can get $3,300 for a dead tiger - what some people in this impoverished nation of 235 million make in a year - but Nurdin said trafficking operations are almost impossible to crack because they involve syndicates.

"Only the well-connected would dare to buy such things," he said, noting that the last person they caught trying to sell a carcass was a soldier.

In the meantime, the tiger catchers are fighting an uphill battle.

At the present rate of deforestation, there will eventually be no safe place to release the captured tigers. So international wildlife experts are working with the government to come up with a 10-year conservation strategy. They want palm oil and other companies to either help monitor the activity of tigers on their property or, better yet, put aside some land as a sanctuary for wildlife.

"For years, we fought against land conversion, but it did not work," said Wibisono, of the tiger conservation alliance. "We had to try a different approach."

For Sartono and his team, catching a tiger is bittersweet.

"It's kind of sad, I feel sorry for the tiger, but it's better than the alternative," said Sartono. "But don't call us tiger catchers. Please! We're tiger savers."