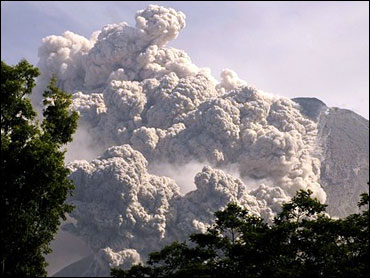 Indonesia's most dangerous volcano spewed a spectacular roiling cloud of hot gas and ash down its southern slope Thursday, sending more than 15,000 villagers running for safety or piling into cars and trucks, officials said.

Mount Merapi has been venting steam and ash for weeks, but the 9 a.m. local time burst was the largest yet, with billowing, dark gray clouds avalanching 3½ miles down the mountain, said Sugiono, a government vulcanologist.

It was one of a series of powerful explosions Thursday, but hundreds of villagers living on the volcano's fertile slopes were refusing to leave, saying they wanted to tend to livestock or crops.

"Of course, we're worried," Supriatun said by mobile phone, adding that her small dairy farming community was so far untouched. "But as long as the hot clouds do not reach us, we won't go."

Others left as quickly as they could, some jumping into a river and swimming across to escape the searing heat. Farmers carrying heaps of grass on their head ran down the mountain, as others clambered onto motorcycles.

Some scientists say a powerful May 27 earthquake that killed more than 5,700 people in an area 25 miles south of Mount Merapi may have contributed to the volcano's volatility in recent weeks.

The rumbling mountain's lava dome has swelled, raising concerns that it could suddenly collapse, sending scalding clouds of fast-moving gas, lava and rocks into areas yet to be evacuated.

"It erupts in the sense of only dome formations and when the domes collapse, then it creates a pyroclastic flow, up to seven kilometers," said vulcanologist A. Ratdomopurbo.

Sutomo, a government official at the scene, said 3,500 people had fled Sleman district on Merapi's southern side, some clutching children as they ran and others heading to towns at the base in trucks or cars.

Another 12,000 fled their villages in Magelang district on the west side, many of them yelling and wiping away tears.

"We saw the hot cloud spilling down the mountain and ran as fast as we could," said Udi Sutrisno, a father of five, adding that ash covered rooftops in Jrakah, a village four miles from the crater.

Sutrisno was among hundreds of people seeking refuge at a makeshift camp set up in a field dotted with Red Cross tents. As he spoke, a truck carrying 30 men, women and children arrived, many smiling with relief.

"I had only enough time to gather clothes for my children," said 24-year-old Sartini, carrying her baby daughter.

Authorities had earlier urged residents to evacuate the danger zone on the mountain's fertile slopes. Some 20,000 left, but thousands more stayed behind, some complaining of boredom at shelters set up in schools, mosques and at government offices.

Merapi's last deadly eruption was in 1994, when it sent out a searing gas cloud that burned 60 people to death. About 1,300 people were killed when it erupted in 1930.

Authorities said that another major, deadly eruption would severely strain ongoing earthquake relief operations in nearby Bantul and Klaten districts. More than a half-million people were displaced in last month's temblor, many living in makeshift shelters with no toilets or running water.

"If there's a large blast at Merapi that causes deaths and injuries, we'll need help from paramedics now deployed in the quake-zone — especially with severe burns," said Imam Purwadi, a government official overseeing relief efforts at both sites.

Indonesia is located in the so-called Pacific "Ring of Fire," an arc of volcanoes and fault lines encircling the Pacific Basin.

The Bulusan volcano in the central Philippines was spewing ash and hot steam into the air late Wednesday, prompting scientists to raise the alert level in fear of a bigger eruption.

In southern Japan, Mount Sakurajima also was acting up, spitting a plume of smoke about 3,300 feet into the air.

There were no reports of damage or injuries in those volcanic eruptions.