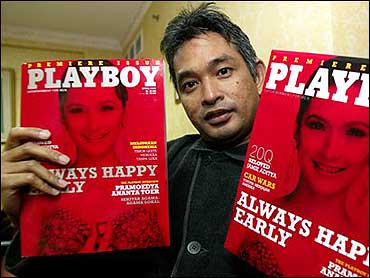 A Playboy magazine editor and a centerfold model who appeared in the first edition in Indonesia were named by police Thursday as suspects in an indecency case, a move praised by religious hard-liners in the predominantly Muslim country.

The magazine launched a toned-down version in Indonesia in April to protests from rock-throwing conservatives demanding it be closed. It kept publishing, but moved its editorial offices to mostly Hindu Bali island.

Unlike its American version and editions in dozens of other countries, Indonesian Playboy contains no nudity.

Kartika Gunawan, who posed in lingerie for the first edition, said she was worried but had the "full support" of her family.

"I am not sorry, because every decision I made was well considered. I was not trying to make a sensation," Gunawan told reporters after being questioned by police Thursday. She previously worked as a relatively unknown television actress, appearing in soap operas. But she had not posed for other publications.

Police said she and Erwin Arnada, Playboy's editor-in-chief in Indonesia, were formally suspected of violating anti-indecency laws that carry sentences of up to two years and eight months in jail.

Arnada and Playboy magazine's U.S. headquarters could not immediately be reached for comment.

Under Indonesian law, declaring someone a suspect is a formal step taken when authorities determine there is enough initial evidence to build a case for trial. Investigations, however, can be dropped later.

Robinson Siregar, deputy chairman of the Indonesian Press Council media advocacy group, said other magazines have published more revealing content and that Playboy may have been unfairly targeted.

"Let's hope the legal process is objective and not conducted based on pressure from certain (religious) groups," he said.

Tabloids in Indonesia, the world's most populous Muslim nation, feature more explicit photos and stories. Pornographic films on video, though illegal, are sold more or less openly at stores across the country.

Indonesian versions of Western magazines FHM and Maxim, which also contain photos of women in underwear, have been on sale for several years with no outcry.