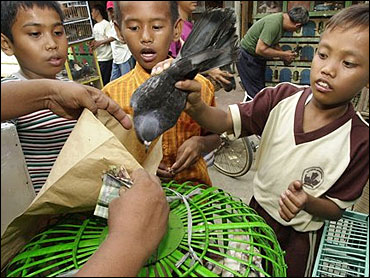 Indonesia on Thursday confirmed bird flu has killed two more people, raising that country's total deaths to seven. The announcement comes a day after China reported its first human cases, including at least one death, both menacing signs that the virus is spreading faster as the winter flu months near.

The World Health Organization in Jakarta said tests sent to a Hong Kong laboratory came back positive for the H5N1 bird flu virus for a 20-year-old woman and a 16-year-old girl who both died last week, said WHO spokeswoman Sari Setiogi.

Indonesian President Susilo Bambang Yudhoyono told businessmen in a speech on the sidelines of the Asia Pacific Economic Cooperation forum in Busan, South Korea that countries must act now to avert a potential pandemic.

"We cannot even begin to imagine the number of people who would be killed," he said. "The impact on our economies would be catastrophic. None of us can afford this."

His warning comes a day after China's Health Ministry confirmed the virus killed a poultry worker and sickened a 9-year-old boy who later recovered in central Hunan province, the official Xinhua News Agency said. The boy's 12-year-old sister, who also died, was recorded as a suspected case. However, no samples were taken before she was cremated so she cannot be considered a confirmed case under the agency's guidelines.

The WHO on Thursday ruled out human-to-human transmission in the Chinese cases, saying they were traced to contact with infected birds.

"If there would be something like that, we would expect more people would be unexpectedly dying of very severe pneumonia," said Henk Bekedam, WHO representative in China. "If there's evidence of human-to-human transmission, there will be small clusters. We are not at that stage."

"The Chinese government has taken a very responsible attitude," he said. "It is not necessary for us to cover up."

China faced heavy criticism in 2003 for its sluggish response to SARS, which is believed to have originated in southern China before spreading via air travel and killing nearly 800 people worldwide.

In addition, China raced to vaccinate billions of poultry as it racheted up a massive nationwide campaign to try to contain the virus as it spreads in the world's most populous nation.

The H5N1 virus has killed at least 64 people in Asia since 2003, two-thirds of them in Vietnam.

Health experts worry the virus, which is currently hard for people to catch, will alter into a form easily passed from person to person, possibly igniting a global flu pandemic that kills millions. So far, most human cases have been traced to contact with infected birds.

Poultry markets in Shanghai were hit hard by the latest news, with shoppers shying away from fowl.

Sales of live chickens at the city's Sanguantan Poultry and Eggs Wholesale Market have dropped by 90 percent to 10,000 a day, said Wang Baorong, the market's general manager.

"Live chicken sales are miserable here these days," Wang said. "Even some vegetables are more expensive than chicken."