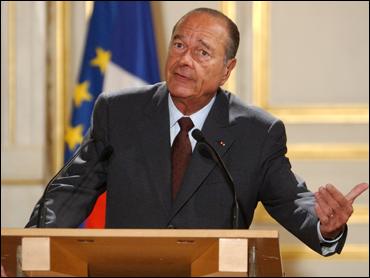 Bulgaria's president angrily summoned the French ambassador Wednesday as critics across the former Soviet bloc lashed out at French President Jacques Chirac for telling Europe's eastern newcomers to "keep quiet" on their pro-Washington stance on Iraq.

Their indignation, coupled with a refusal to withdraw support for the U.S. threat of force against Saddam Hussein, underscored how the ex-communist countries of the "new Europe" are finding strength, solidarity and unprecedented influence by sticking together.

"This is no longer Napoleon's Europe but the Europe of dissidents like (former Czech President) Vaclav Havel," an editorial in Latvia's Diena newspaper read.

"Chirac is doing exactly what he criticizes the United States of doing: telling other countries what to do," said Guntars Krasts, head of the European affairs committee in Latvia's parliament.

The French president made the comments Monday after many of the 10 ex-communist countries invited to join the European Union in May 2004 signed declarations of support for the United States' tough position against Iraq.

"It is not well brought-up behavior," Chirac said of the declarations. "They missed a good opportunity to keep quiet." He warned that those nations were on "dangerous" ground because the parliaments of the 15 western European countries that now make up the EU still must formally vote to admit the eastern newcomers.

In Bulgaria, which has offered a 150-member non-combat unit in case of war, President Georgi Parvanov summoned France's ambassador Wednesday in a show of displeasure.

At a meeting with the envoy, Jean-Loup Kuhn-Delforge, Parvanov "expressed concern about ... the emotional statement" by Chirac, his office said.

"Bulgaria insists on mutual respect between EU members and applicant countries, between big and small states," Parvanov said. "Pressure by one state on another should not be allowed."

French Interior Minister Nicolas Sarkozy, in Sofia for discussions on countering illegal immigration, sought to smooth over the controversy.

Chirac only wanted to tell prospective EU members that joining "gives a lot of rights but also creates a lot of obligations, including solidarity," he told reporters.

But as Chirac's remarks sank in Wednesday, fury erupted.

"Chirac's outburst must be understood as the recognition that a dream is beginning to unravel. The New Europe imagined and created from rubble after the last war will not gravitate necessarily around the Paris-Berlin axis," the Romanian newspaper Ziua said in an editorial headlined "Le Petit Big Brother."

Not all of Chirac's targets took him to task.

A Hungarian official sought to play down the fuss, and Polish Foreign Minister Wlodzimierz Cimoszewicz said his government respected France's right to express its opinion, and he warned against "too much emotional rhetoric."

But reaction elsewhere was ferocious. In many countries, Chirac's remark was translated as "shut up" rather than "keep quiet," only fueling the collective sense of outrage.

The Lithuanian newspaper Lietuvos Rytas said in an editorial: "It looks like Chirac has forgotten that eastern European countries broke free from communism and ... will not be the silent servants of Paris."

In tiny Slovakia, the daily Pravda wrote Wednesday in a commentary that "neither Slovakia nor any other candidate country will enter the EU to keep silent, but in order to make their voice be heard more."

Romanians, who have been fascinated by French language, culture and architecture for more than 150 years, snapped at Chirac as a "hypocrite" and accused the French leader of misreading its support for a quick and decisive end to the Iraq crisis.

"What Chirac ... doesn't understand is that Romania is not pro-American, nor anti-French, nor anti-German, and least of all bloodthirsty for Iraq," said Cristian Tudor Popescu, editor-in-chief of the daily Adevarul.

"Did the Europeans and especially the French ever understand what Romania endured under communism? Romania is desperate ... Romania sees in the United States at this time the strongest guarantee that it won't have to return to the quagmire."