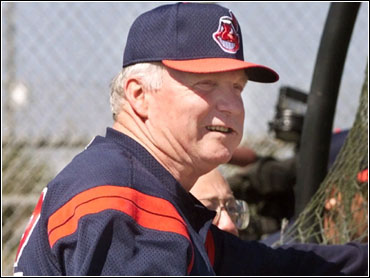 Cleveland Indians manager Charlie Manuel had emergency colon surgery Monday night and is expected to be hospitalized for at least a week.

Manuel, who replaced Mike Hargrove as the Indians manager in November, had eight inches removed from his colon, the team said today. Doctors found his colon had ruptured.

After experiencing cramping and stomach discomfort the past few days, Manuel, who has had two heart attacks and open heart surgery, went to Winter Haven Hospital on Monday and had surgery after being diagnosed with diverticulitis.

Hart said that while Manuel is out it will remain business as usual for the Indians. Former Cubs manager Jim Riggleman, who is now the Indians first-base coach, bench coach Grady Little and pitching coach Dick Pole will jointly run the club.

The Indians, who were scheduled to play an intra-squad game on Tuesday, will open their exhibition season on Thursday against Philadelphia.

"Because of the timing I don't think it will be a disruption at all," Hart said. "We're not at a serious time in the schedule."

Manuel had been complaining of stomach problems since Saturday, and felt so badly on Monday that he skipped his daily media interview session.

As he walked around the Indians clubhouse it was obvious Manuel wasn't his usual fun-loving self. Normally, he would mingle with the players like he did for six seasons as the team's hitting coach.

Manuel had told Hart that he had gotten sick after a staff dinner on Friday night. He thought it was just a stomach flu and continued to go about his duties over the weekend while new Indians owner Larry Dolan was in town. Manuel even pitched some batting practice unaware of the rupture.

Hart, who informed the Indians players of Manuel's surgery Tuesday morning, visited with Manuel before and after his surgery.

"Charlie was upset," Hart said. "He said, 'I've been waiting my whole life for this."'

The 56-year-old Manuel has had major health scares. He has suffered two heart attacks and in July, 1998 had open heart surgery.

Manuel, who has never managed at the major-league level, passed an executive physical before he was hired on Nov. 1.

"People ask me about the stress of the job," he said recently. "Believe me, I've never felt the stress. Some of the best games I've ever seen were in the 1997 postseason when we went to the World Series. Those were nail-biting games. I enjoyed every minute of them."

Hart said there should be no break in the team's workout routine with Manuel out.

"Charlie had already set the tone and the goals for thi team," Hart said.