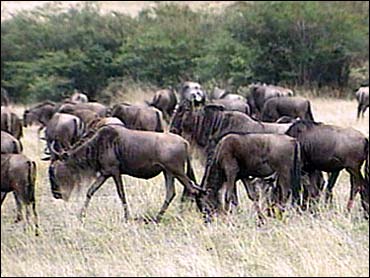 A wildebeest that was part of a man's menagerie of exotic animals trampled him to death on his northern Indiana farm, police said.

It was unclear what caused the roughly 500-pound wildebeest, an African antelope also known as a gnu, to attack Klaus "Dick" Radandt, 64, in the barnyard behind his home Sunday in North Liberty, 10 miles southwest of South Bend.

Police said Radandt's wife, Terrilyn, became concerned when he did not return for lunch after going to the barnyard about 10 a.m. She investigated and found him lying on the ground and called paramedics, who were unable to revive him.

Wildebeests naturally grow large curved horns, but this animal's horns had been cut down to the nubs, police said.

St. Joseph County Coroner Chuck Hurley said the male animal apparently used its head to repeatedly ram Radandt and then trampled him after he fell to the ground. The official cause of death was blunt force trauma to the chest and head, Hurley said.

St. Joseph County Police Cpl. Steven Shively, who investigated the death, said he was told that male wildebeests become very aggressive this time of year because it is the beginning of the mating season.

With a female wildebeest nearby, the animal may have considered Radandt a threat.

Shively said the Radandts own three wildebeests — a male, a female and a calf the pair produced. They also own several other exotic animals, such as ostriches, emus, reindeer and llamas, he said.