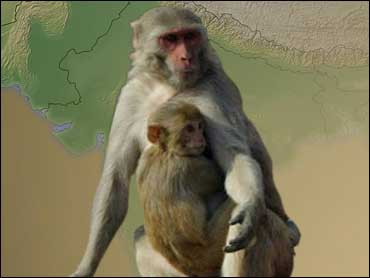 Wild monkeys attacked a senior government official who then fell from a balcony at his home and died Sunday, media reported.

New Delhi Deputy Mayor S.S. Bajwa was rushed to a hospital after the attack by a gang of Rhesus macaques, but succumbed to head injuries sustained in his fall, the Press Trust of India news agency and The Times of India reported.

Neighbors said Bajwa was reading newspaper on the terrace of his residence in east Delhi on Saturday morning when a group of three to four monkeys closed in on him. "The monkeys came all of a sudden. Bajwaji tried to shoo them away and in the process fell off the terrace," neighbor Anand Suri told ExpressIndia.

Many government buildings, temples and residential neighborhoods in New Delhi are overrun by Rhesus macaques, which scare passers-by and occasionally bite or snatch food from unsuspecting visitors.

Last year, the Delhi High Court reprimanded city authorities for failing to stop the animals from terrifying residents and asked them to find a permanent solution to the monkey menace.

Part of the problem is that devout Hindus believe monkeys are manifestations of the monkey god Hanuman and feed them bananas and peanuts - encouraging them to frequent public places.

Over the years, city authorities have employed monkey catchers who use langurs - a larger and fiercer kind of monkey - to scare or catch the macaques, but the problem persists.