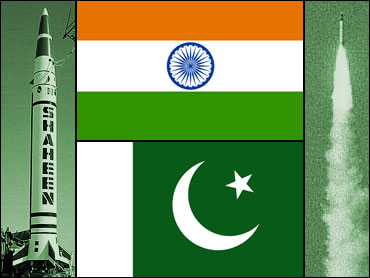 Prime Minister Atal Bihari Vajpayee said Thursday that India would not reciprocate on Pakistan's offer to dismantle its nuclear weapons, but hoped never to have to use them against its longtime rival.

"We are seeking friendship with Pakistan, but we will be cautious," Vajpayee told Parliament during a debate on the new peace overtures between the South Asian rivals.

"I have told the Pakistani leaders that India and Pakistan have to live together," he said. "We can change friends, but we can't change neighbors."

Vajpayee said Pakistan's only target for nuclear weapons is India, but that India had other countries of concern.

"We don't accept Pakistan's proposal ... as Pakistan's nuclear program is India-specific," Vajpayee said. "But we are concerned about other states as well."

He reiterated that India had adopted a no-first-strike nuclear policy, but that Pakistan had not.

Meanwhile, U.S. Deputy Secretary of State Richard Armitage said Thursday that the infiltration of militants from Pakistan into Indian-controlled Kashmir has declined. Both countries claim the disputed Himalayan province of Kashmir.

"The infiltration, the cross-border violence and the lethality are down from this time last year," Armitage said after meetings with Pakistani leaders.

But, "that doesn't fill me with great enthusiasm. ... I think any violence is too much violence," he told reporters. "I'm not keeping score with people's lives."

He gave no figures to back up his statement on Kashmir.

The countries have fought two wars over Kashmir. They came to the brink of a new conflict last year after India blamed Pakistan for a bloody attack on its parliament in December 2001. Pakistan condemned the attack and denied involvement.

While tension had eased a little with a pullback of some troops, it was still a surprise when Vajpayee announced last month that he wanted talks with Pakistan.

Armitage praised both countries for their efforts toward reconciliation, saying it was counterproductive to lay blame.

"I don't think it's useful for me to point a finger at India or for that matter to blame Pakistan for what's going on. We're in a situation that's been brought about by 50-odd years of history."

The international community has been pressing both nations to improve relations to prevent what many fear could escalate into a nuclear confrontation.

Those fears peaked last summer when India and Pakistan amassed hundreds of thousands of troops along their frontier after New Delhi accused Islamabad of backing a deadly suicide attack on India's Parliament compound. Pakistan denied involvement.

"We don't want to use all our resources on buying arms and weapons," Vajpayee said. "But we have to defend ourselves in case of a threat."

India has fought three wars with Pakistan since their independence from Britain in 1947. India also fought a border war with China in 1962, although relations are warming rapidly between New Delhi and Beijing.

Pakistan and India declared themselves nuclear powers after detonating atomic bombs in 1998. Neither country has opened its arsenal to international inspectors and it is not known exactly how many weapons they have.

Vajpayee told Parliament that he launched the peace initiative with Pakistan two weeks ago — during a speech in the disputed Himalayan province of Kashmir, which both countries claim — as he observed global events.

He said as he watched the United States overrule the United Nations and attack Iraq, he determined that India must embark on a new initiative on Kashmir.

"I felt that small developing, nonaligned countries have to think about their future," said the 78-year-old prime minister, who would like to mark his place in history by sealing a lasting peace with Pakistan.